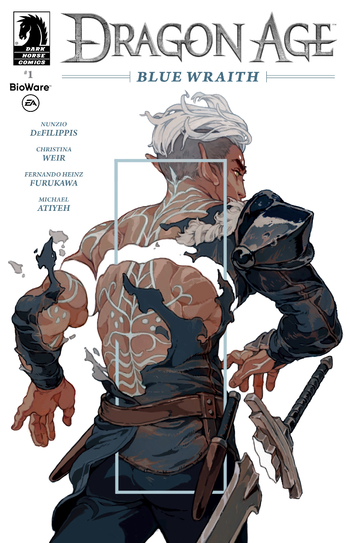 Blue Wraith is a comic book mini-series set in the Dragon Age universe, published by Dark Horse Comics. The title refers to Fenris, a former companion of Hawke from Dragon Age II, who has since settled down as a slave-liberating Vigilante Man in northeastern Tevinter. In this series, he crosses paths with the Ragtag Bunch of Misfits who have managed to escape Qarinus/Ventus when it fell to the Qunari (Marius, Tessa, Sir Aaron, Vaea, Calix, and Francesca Invidus) and are now in pursuit of Cedric Marquette as he delivers a mysterious artifact to House Danarius — Fenris' former owners.
Advertisement:

This is part three of Vaea and Ser Aaron's story, continuing from Knight Errant and Dragon Age: Deception and concluding with Dark Fortress.