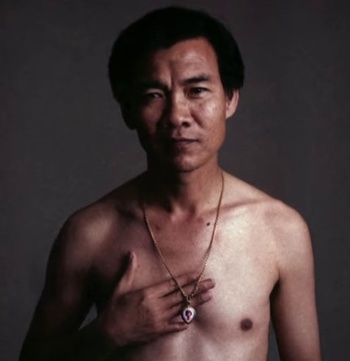 He first trained as a surgeon and gynecologist. In the late 1970s, he managed to survive under the Khmer Rouge regime of Pol Pot that took over Cambodia and submitted the country to a horrific purge and agrarian revolution that killed millions (including his wife), later qualified as genocide

. After managing to escape Cambodia, he worked in a refugee camp in Thailand, then moved to America.

Unable to resume his medicine practice in the US, and despite not having trained as an actor before, he was cast in the role of a fellow Real Life Cambodian genocide survivor, journalist Dith Pran, in The Killing Fields, which ended up his best known and most acclaimed role. So far, he is the only actor of Asian descent to win an Academy Award for Best Supporting Actor (and that was very much Award Category Fraud considering his screentime in the film). He appeared in a dozen other productions afterwards.

He was murdered at the age of 55 in a bungled robbery outside his home in Los Angeles on February 25, 1996.