"At my age, I'm just at right level to hit you somewhere. And I'm to young to understand empathy. I just don't care!"

Apple Bloom is the "founder" of the Cutie Mark Crusaders and Applejack's younger sister and possibly daughter.

A young filly and member of the Cutie Mark Crusaders, who seems to be a little more... interested in others than you would expect from a child.

Rarity's little sister, who may or may not be possessed by a demon like dream creature, named Thrackerzod. Thrackerzod is a creature from the mysterious shadow world, where only dreams may go, and seeks to kill Twilight Sparkle to claim her, because of an unspecified and complex conspiracy/war involving the dream world. She often uses the crusaders to help her learn to better blend in and as pawns in her plans, to little success. Despite this, she has occasionally shown a general attachment to her friends. Due to being possessed, Sweetie Belle's true personality has never been revealed. She is also the only besides Twilight to sense that the universe has rebooted.

"Oh Twilight, if I was a lesser pony, I'd be furious with you. How lucky for us both that I am a god."

The "benevolent" God Queen Tyrant of Equestria and older sister to Princess Luna. Celestia is Twilight's (abusive) teacher, routinely putting her student through cruel punishments, like making shoving stuff up her butt and destroying her prized toy, before making her write a long essay about what she learned from Celestia destroying her toy. Celestia is believed to be a god among ponies, who can strike them down and do as please, while having to face no retractions herself. She is feared by many across Equestria and has been shown to be very unpredictable and sadistic. 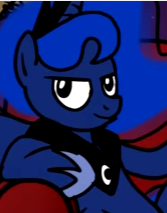 "How else am I supposed to get you to dress as a banana!"

to see her as Nightmare Moon

Celestia's younger sister, who long ago became Nightmare Moon and rebelled against Celestia.
Other

The corrupt and incompetent mayor of Ponyville. 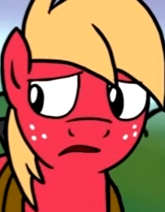 "Well, I'll be honest, I'm only good at two things. One is heavy lifting, and the other...well, anyone will tell you they don't call me Big Mac for nothing."

The older brother to both Applejack and Applebloom. 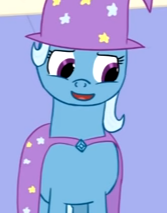 "Come, everypony, to the great, the powerful, Tricksy Shoe...show. Oh shoot, did I write that?"
The daughter of two accomplished stage performers, Trixie's parents where gunned down in the alleyway, while leaving their latest show. The culprit: A disgruntled theater critic. Since then, Trixie Lulamoon has sworn to try and uphold her parents' legacy. Until one fateful day, a bunch of jerks started interrupting her show for no reason other then showing off in her own show. 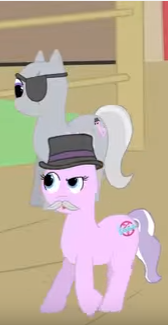 Silver Spoon on top, Diamond Tiara on bottom
Silver Spoon: "I don't even really like boy bands but I know that society expects me to because of my gender and age. So I just follow the rules. And Diamond Tiara likes them."
The local bullies.

The local teacher at CMC's school and rabid supporter of Celestia's regime.

"The cure is nudity!"

A local Zebra and voodoo expert. 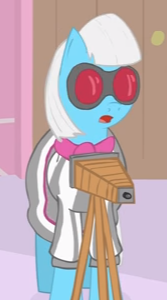 A photographer and fashion star, who took advantage of Fluttershy's Extreme Doormat and other emotional problems, to make her a fashion star.

Hastur "The King in Yellow" 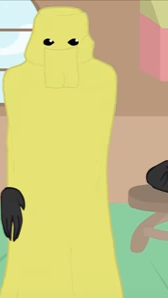 Thrackerzod's partner/possible superior, he is mysterious deity who is part of a conspiracy with unseen forces, that somehow relates to the fate of Twilight Sparkle. 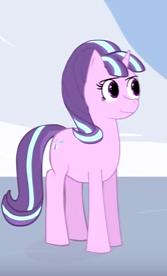 I was worried you wouldn't ask me about my tragic backstory!

A unicorn who tried to mess up the timeline, in order to get back at Twilight and her friends. 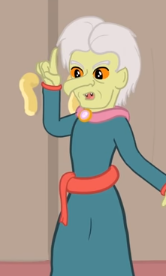 "I hid the Elements at the center of the castle garden maze. I got lost all day. I befriended a pigeon... but he turned on me..."

A Sorcerer and old enemy of Celestia's with the power to control furniture, who was previously imprisoned in stone. He is based on the Gen 1 character of the same name and takes over Discord's role as the premiere villain of Season 2. 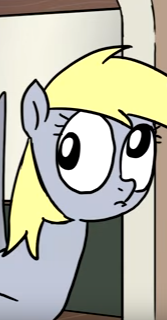 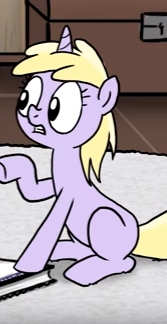 "Mom! Everyone can see you! Here, hide behind this bush."

"Life is like Jenga. No, no, listen! You're supposed to pull out these blocks, and the blocks on the bottom are the most important, but... all anyone ever cares about is whether or not the blocks on the top are gonna fall over." 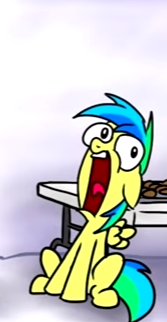 "OH MY GAWD THEY'RE GOING TO GRIND US INTO RAINBOWS!"
[Beat]
"EVERYBODY PANIC!"

One of the students who failed the flight exam after both her wings broke for no reason whatsoever. 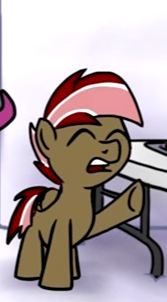 "I don't try to understand the fillies in my life. I just enjoy their company."

Another flight student who failed the exam. Is in love with Scootaloo for some reason. 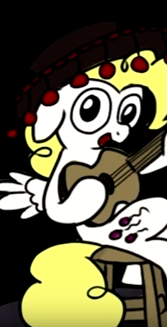 You can trust her!

"Man, get over it. After a few of these, it's like nothing. Sure, you stay up late at night thinking about how your family would think of you, and you wonder what Pony Hell is gonna be like, but... other than that, it's no big deal."

The tour guide and chief engineer of the Rainbow Factory. Surprise reluctantly takes part in the atrocities committed within the facility, repeatedly showing guilt about her actions and only participating due to a belief that what they do is a burden that they must bear. She does everything she can to help ease her supervisor, Rainbow Dash (who took the position without knowing what she would actually be doing) into doing her new job. 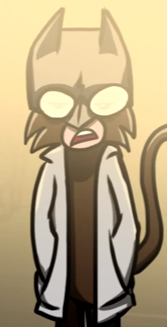 The Bat Who Lived

'"Listen to me, Dashie. You can't go outside because if you do, the government will find you, and then they'll cut you into pieces." 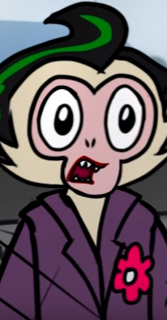 "Monkeys are always asking why I don't have a nose, and why I sharpen my teeth, and how come I wear clown makeup, but this is the face of fear!" 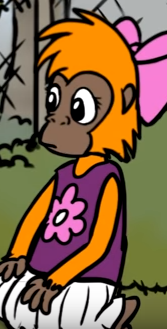 "Hey! You bein' robbed over there?"

"Okay, don't go... hurl yourself of the roof. Gosh, why you gotta be so dramatic?"

A young girl Rainbow befriends in RDP: My Little Dashie, who quickly becomes her only friend and outside contact... until The Jokermort arrives. 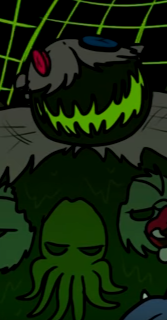 "You've pretty eyes, yes you do!
Flesh and blood, I want it too!
I'll wear your body like a suit.
Watch out now I'm on the loose!"

A ghostly creature that has taken the form of Twilight's old childhood toys during RDP: Haunting Nightmare. It plans to use her for something sinister. 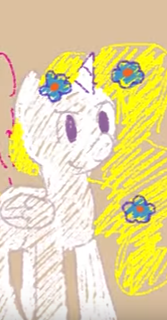 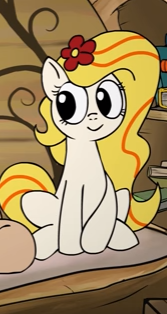 to see her physical form

"Are you enjoying my book?"

The main character of the book "The Star in Yellow", and the undisputed best pony. She appears as a hallucination/spirit that tries to manipulate Twilight into reading her book for unstated reasons. 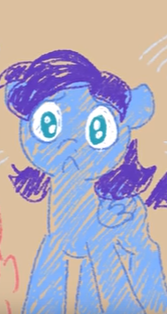 A misbehaving child and "bad pony", as well as Yellow Star's younger sister.