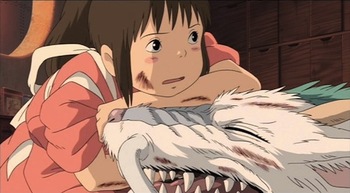 A human girl deliberately sticking her hand inside the mouth of a dragon!
Advertisement: