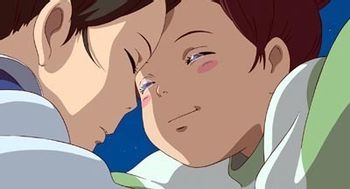 Once you meet someone, you never really forget them.
Advertisement:

Even though this is the spirit world, Chihiro soon learns that appearances mean nothing as she constantly finds herself surrounded by people and spirits alike whose kindness is the only thing that keeps her from giving up.

I’ve found a brightness. It’s always with me.