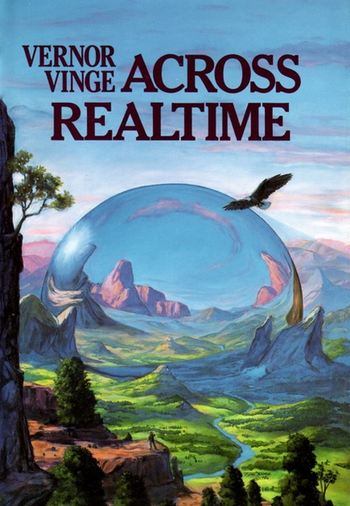 The major initial technology change is the invention of the Bobble, a projected sphere that completely separates the inside from the outside. This is initially believed to be permanent, which would lead to anyone trapped inside a bobble dying when their oxygen runs out. The inventors of the bobble quickly style themselves as The Peace Authority and eventually take over political power, bobbling all who oppose them in an ends-justify-the-means method of ending all war... as well as anyone might threaten their superiority.

The Peace War is set when the first generation of Bobbles begin to burst... revealing that not only are they not permanent, but that the bobbles actually freeze time inside them. The Authority's grip on power begins to fail as many of the people bobbled years ago in the "Peace War" suddenly find themselves in the future.

is set some decades later, and involves an attempt by the Republic of New Mexico (one of many independent nations in what used to be the USA) to invade the "ungoverned" lands to its north. Bobble technology has become widespread and developed everyday uses, some of which are described or demonstrated.

Marooned in Realtime is set after The Singularity, where the majority of the human population has seemingly vanished. Only those who were in stasis (i.e. bobbled) during the event (including characters from both The Peace War and The Ungoverned) remain. Those who come out of stasis are slowly rounded up and brought to a meeting point further down the timeline. During one move a leader of the colony is stranded outside stasis, starting a murder/mystery investigation to discover who did it and why.

Alternative Title(s): The Peace War, Marooned In Realtime, The Ungoverned