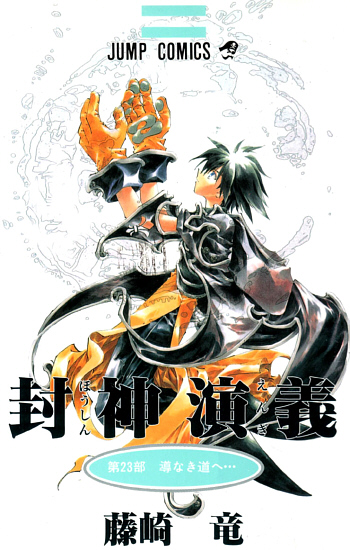 Soul Hunter (or Hoshin Engi) is a Shōnen Manga series by Ryu Fujisaki, published by Shueisha. Serialized in Weekly Shōnen Jump magazine from 1996-2000 and compiled in 23 tankōbon volumes by Shueisha, the 18 Kanzenban volumes were released periodically between July 2005 and June 2006 in Japan only. VIZ Media has acquired the rights to the Manga, with bimonthly releases starting June 5, 2007 to the United States and Canada.

Taikoubou is a young Sennin (a class of supernatural beings) charged by his mentor to seal up all of the rogue Sennin causing trouble in the human world, the chief of whom is Dakki, who has brainwashed the current emperor and causing all sorts of grief for the citizens of the Yin Dynasty...

The plot thickens when Taikoubou discovers that his mentor has ulterior motives, and the conspiracy encompasses all of the Senin world.

Houshin Engi, the Japanese rendering of Fengshen Yanyi (which means The Treatise of the Gods, itself already Very Loosely Based on a True Story) took the same direction as Saiyuki. Whereas Saiyuki revolves around four guys riding a dragon jeep to the west, Houshin Engi revolves around the gods (who are also mostly Bishōnen) altering the course of history and helping the Chinese Dynasty transfer from Yin to Zhou in the 11th Century BC.

The story was also adapted to a 26 episode Anime of the same name broadcast on Japanese TV in 1999 and released in North America on DVD as Soul Hunter in 2001. As of January 2009, Shomei TV announced their intentions to remake the anime series if they received 10,000 signatures, which was finally reached in July 2017. The new Houshin Engi remake, Hakyuu Houshin Engi, debuted in 2018, together with a short official manga sequel from Ryu Fujisaki.

Additionally, a video game based on the manga was developed for for the Playstation and the Wonderswan. Soul Hunter characters also appear in Jump Ultimate Stars for Nintendo DS, with only Taikobo playable and other characters serving as support.