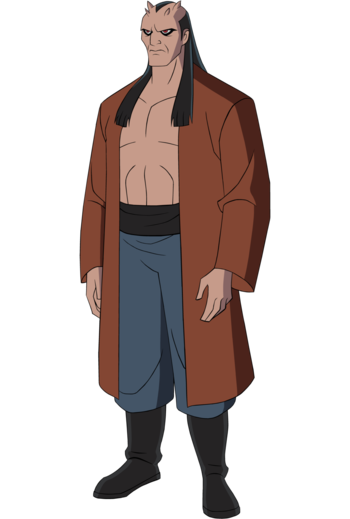 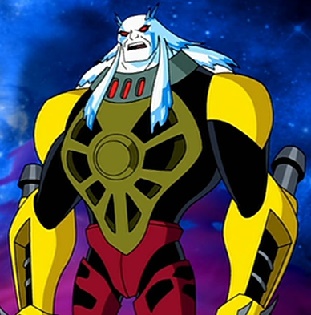 Voiced by: John DiMaggio
"No one escapes Aggregor!"

An Osmosian (Kevin's species) criminal who serves as the main villain in season 1. Aggregor is attempting to collect five aliens from the Andromeda galaxy and absorb them with a help of a machine enhancing his absorption powers so he can become strong enough to get his hands on what he calls the "Ultimate Prize". The aliens escaped on Earth split up to escape him, leading to his arrival on Earth. While initially not especially powerful, Aggregor is a competent fighter and overall an amazingly savvy schemer who was able to trick the protagonist into reaching his goals for most of his appearance. 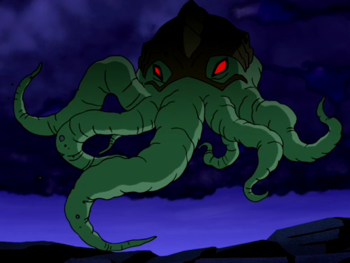 Voiced by: John DiMaggio
"Everybody will bow before him!"

A Lovecraft-esque Eldritch Abomination and Dimension Lord who attempted to take over Earth during the Middle Age. His invasion was stopped by Sir George, who eventually took his heart apart, leaving him weakened, and sealed him away in his own dimension. George then created the Forever Knight to ensure the thing would never escape again. Unfortunately, following George's departure, the Forever Knight forgot their goal over time, and a faction of them ended up accidentally breaking the seal, partially freeing Dagon in the process. This, coupled with the intervention of a sect worshiping Dagon, eventually led to his imminent return as the major Big Bad for season 3 of Ultimate Alien. 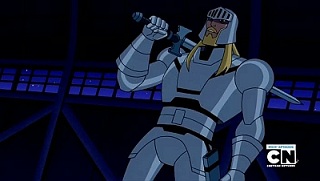 Yes, this is the same guy.
Voiced by: Peter Renaday

An enigmatic, immortal knight who is responsible for creating the Forever Knights in the Middle Ages. After being absent for centuries, George eventually comes back in Ultimate Alien to re-unite his order and ready them to fight an incoming threat, the Eldritch Abomination Dagon. Though well-intentioned and extremely moral, George believes all aliens are monsters, and wants them banished from Earth or dead. 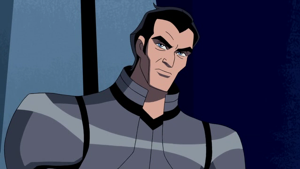 The leader of another Forever Knight separate faction. 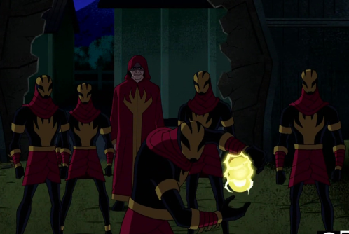 The Esoterica, also known as the Flame Keepers' Circle, are a group introduced in season 2 of Ultimate Alien. Though they initially appear to be a philanthropic organization that believes in aliens helping humans to evolve, they actually are a cult worshipping Dagon, and intending to bring him back on Earth. The season 3 story arc focuses on a war between them and the Forever Knights. 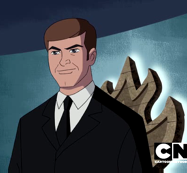 The leader of the Esoterica cult. 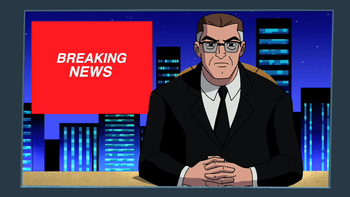 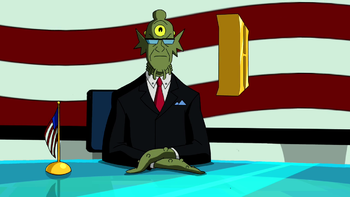 to see him as an Alien
Voiced by: John DiMaggio

An anchorman who for unknown reasons developed a violent hatred of aliens after Ben's existence was revealed to the world in Ultimate Alien. Harangue is convinced that aliens are a menace (especially Ben), and passes most of his time trying to convince everyone that he is right. Occasionally, he will also attempt things against Ben himself, but most of his appearances only have him criticizing Ben on TV. 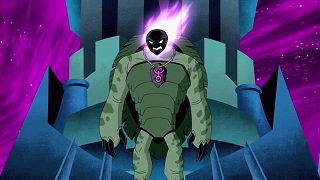 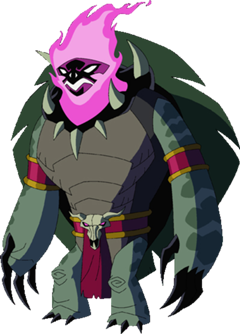 A villain introduced in "Where the Magic Happens", and the Big Bad from Charmcaster's perspective. A Geochelone Aerio magic-user, Addwaitya was once a revered philosopher amongst his people, until he somehow ended up in the possession of the Alpha Rune, an artifact that granted him control over Magic itself. He used it to take over the dimension of Ledgerdomain, exterminating the civilization of human spellcasters who had been living here and enslaving the others. Hex and Charmcaster were the only known survivors thanks to the sacrifice of Charmcaster's father, Spellbinder. 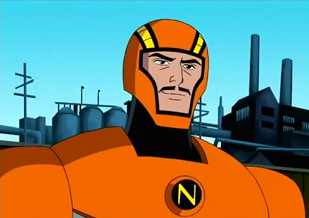 Originally a famous super-hero operating before Ben even got the Omnitrix, Captain Nemesis ended up causing a fake kidnapping attempt on young star actor Jennifer Nocturne, so he could save her and come back on the scene. After the kidnapping was stopped by Ben, he grew jealous of him, to the point he eventually offered a "friendly competition" between them to see who was the best hero. Ben ended up defeating him, causing Nemesis's jealousy to turn into a grudge, and he upgraded his armor to a dangerous level before attempting to get his revenge on him. He eventually lost all common sense and became a villain. 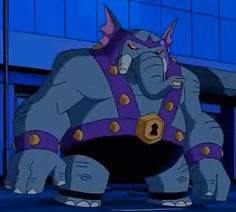 Voiced by: Dee Bradley Baker (Ultimate Alien), Eric Bauza (Omniverse)
"You think you can stop me? I am Trombipulor! The Galaxy's biggest Evil Genius! In Height and Weight"

An elephant-looking alien criminal who claims to be the biggest Evil Genius in the galaxy. 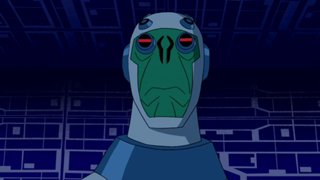 Formerly one of the Weapon Masters of Techadon. In the Ultimate Alien episode of the same name, he attempted to steal the Ultimatrix from Ben. In Omniverse, it is revealed that he was removed from the Techadon Empire for his failure to capture the Ultimatrix, and has become an independent businessman. 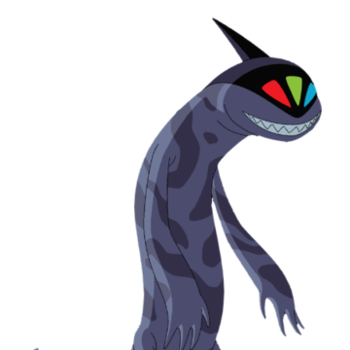 "Nothing will ever be okay... AGAIN!"
Voiced by: Dee Bradley Baker

A Merlinisapien who was once the leader of a revolution against a tyrannical and oppressive government, he was captured and exiled from his homeworld. He arrived on Earth seeking refuge and aid, but in spite of his pleas, Colonel Rozum imprisoned him in Area 51. Prisoner 775 spent 50 years imprisoned, during which time the revolution was destroyed and his family killed. The traumatic loss and his imprisonment left him a vengeful and unhinged wreck who will do anything it takes to get revenge on Rozum.