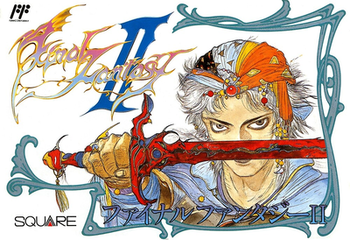 Final Fantasy II is second entry in the bone-shatteringly popular Final Fantasy series, released on the Famicom in 1988. The game would initially fail to reach western shores, though this was an error eventually rectified in the 2000s.

In the flight from the occupied city of Fynn, four orphans are ensnared by imperial troops and left for dead. Three of the survivors are recovered by a mystic working for the Wild Rose Rebellion and taken to a nearby stronghold. Upon being revived, the group is enlisted to — what else? — help stop The Empire from taking over the world. Emperor Mateus, a pretty boy with megalomaniacal designs (hey, that sounds kind of familiar), has a slight advantage in this contest being that he's opened the gates of Hell to enlist an army of demons.

Squaresoft were beginning to experiment with larger, more epic storylines with a memorable supporting cast. Indeed, the heroes have personalities, names, and a dynamic with each other, unlike in the first game where they were simply cutouts. It's also the first FF to include guest characters who rotate out of the party at regular intervals. Three of these fellas even got their adventure in the Dawn of Souls remake, joined by the previously-unplayable Prince Scott to round out their party of four.

Final Fantasy II adopted a 'learn by doing' growth system that has since come to be more commonly associated with SaGa—since both were developed by Akitoshi Kawazu (the brains behind Square's more open-ended JRPGs)—and The Elder Scrolls: Casting magic increases your Mana pool and magical power, getting hit a lot increases your Hit Points and Defense, et cetera. Characters must also train in weapons: Josef starts out as a Bare-Fisted Monk, but if you switch him to a lance, you'll notice he isn't hitting as hard or as frequently. However, after using it in a few battles, he'll gain proficiency and return to his level of comfort.

Like Final Fantasy, you teach magic by buying scrolls from shops. However, unlike I, any character can learn any variety of spells, up to a maximum of 16. If you run out of space, just drop a spell from your menu. Magic tiers are back as well, although each character must level up spells (in a faint precursor to Secret of Mana) to cast their Fira/Firaga equivalents. One of the biggest blunders a player can make is failing to use their Esuna spell to remove negative status effects; if an enemy uses a level 8 status effect and your Esuna is only level 4, you may not be able to fix it during battles.

One oddity is the inclusion of Keywords in dialog, never seen before or since in Final Fantasy. It's a bit superfluous for the most part, though the Anniversary Edition's Arcane Labyrinth Bonus Dungeon (see below) makes more meaningful use of it.

This game is where many FF staples began: Dragoons, the ultimate magic spell Ultima, the recurring character named Cid and his affinity for Airships,note This was retconned in the re-release of Final Fantasy, where he is mentioned as the creator of that game's airship and is involved in the game's lore. and too many iconic creatures to count: Chocobos, Behemoths, Bombs, and more. Characters can also be shifted between the front and back row for the first time, as well as target any combatant with any action, or choose whether to hit one or all targets of a given affiliation with any spell.

It initially got remade on the WonderSwan, and later the PlayStation as part of the Compilation Rerelease Final Fantasy Origins, which added some FMV cutscenes. The aforementioned Dawn of Souls is another dual release for the Game Boy Advance; it came with an expansion designed with veterans in mind. A hi-def remake came out for the PlayStation Portable and iOS; it rolled out the Arcane Labyrinth, a set of bonus dungeons that will appeal only to the hardcore. It also added in a new "Guard" command so you can defend yourself for half damage. In 2021, this game was remastered as a part of the Final Fantasy Pixel Remaster series, which was released on PC via Steam and mobile devices. 2023 will see the Pixel Remaster version brought to the Nintendo Switch and PlayStation 4.

"Rebel curs!"
The party was defeated.