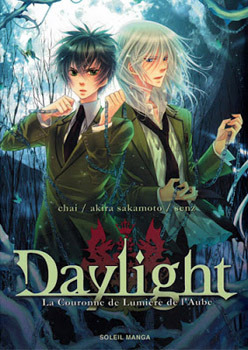 Daylight ~Asa ni Hikari no Kanmuri wo~ is a visual novel made by Senz in 2008. At first glance it may seems a boy's love game, but the shounen-ai hints are very light in the game. A manga adaption of the game was made in the same year by Akira Sakamoto.

The plot stars Uluca Rufen, called Luca by his friends. At the beginning of the new school term Luca find himself trasferred from his single room to a 2 person room in his dormitory. His new roomate is a gloomy senior named Eusmylus C. R. Wintertherioum (shortened as Eus). Soons after he is nominated the Morning Messenger of the Night Festival that will happen in two months. Not only will he have to deal with this role (considered very important), but thanks to his friend Mei, while trying to solve the seven mysteries of the Academy, he will be deeply involved with the secrets of the "Legend" very despised by him.....

Daylight ~Asa ni Hikari no Kanmuri wo~ provides examples of the following tropes: