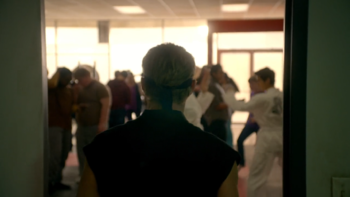 noun (obsolete). A group of cobras.

In a flashback to 1979 in Encino Hills, California, 12-year-old Johnny Lawrence goes on a bike ride where he discovers the original Cobra Kai dojo. In the present day, he observes the new crop of students drawn to his dojo, but denounces them all as "losers" and "nerds". He openly ridicules Miguel's friend Eli, who has an unsightly scar from a cleft lip surgery, which in turn draws an objection from his friend Demetri. After he challenges Johnny's authority, Johnny orders Demetri to hit him and quickly flips him to the ground as a lesson to the others. Demetri then quits the dojo, claiming that as long as he is friends with Miguel, no one at school will bother him anyway. As if to demonstrate the point, a battered and bruised Kyler spots the pair, but meekly turns and walks away.

Meanwhile, Daniel has resumed his regular training routine but yearns for someone to train with. He approaches Sam, but she is too dejected by having become a target of Yasmine's cyberbullying to participate. His wife and his young son Anthony are also uninterested. At the car dealership, Robby has seemingly become a model employee, but Daniel's loutish cousin Louie begins to haze him by suggesting that he move one of the cars in the crowded showroom closer to the front window, as a favor to Daniel. Robby obligingly enters the car and turns on the engine, but Daniel quickly intervenes and scolds him for the reckless act, causing Robby to quit. Upon realizing the truth of the matter, Daniel goes after him to apologize but accidentally startles Robby, prompting the boy to wheel around with his fists raised. Daniel talks him down and corrects a flaw in Robby's punching technique, and the two reconcile.

At school, Sam finds herself without a partner in science lab, but Miguel volunteers to take her into his group with Demetri. Sam thanks Miguel for standing up for her in the lunch room, but playfully points out a flaw in his fighting technique and the two begin to bond. Back at the dojo, Johnny is dismayed that there are fewer students than the day before, with many having quit due to his degrading teaching style. He points out Eli (whom he has nicknamed "Lip") as a positive example of a non-quitter, but when the boy objects to the name, Johnny encourages him to "flip the script" and do something to take the focus away from his scar. Instead, Eli walks out in humiliation. After class, Miguel stands up for his friends by telling Johnny "You don't know what it's like to be us." Later that night, Johnny returns home and has a flashback to his childhood where he asks his stepfather if he can take karate lessons, only to be mocked and berated.

At LaRusso, Louie is forced to apologize to Robby for tricking him, but gives Robby the task of hand delivering the company sales report to Daniel's house that night as a peace offering. When Robby arrives, he finds Daniel in the midst of a kata session, which intrigues him. Upon revealing that the sales report was in fact another prank by Louie, Daniel invites Robby to stay and learn about kata, and Robby accepts.

The next day at Cobra Kai finds even fewer students in attendance, but this time Johnny blames himself. Though he makes no apologies for his harsh methods, he tells his students that he used to be weak just like them, and that with training, Cobra Kai can help them find their true power. At that moment, Eli re-enters the dojo with a blue mohawk and a cocky new attitude, thus earning Johnny's approval and the new nickname of Hawk. After triumphantly reciting the Cobra Kai creed, Johnny prepares to lead his students in another training session.

Johnny: Class! Are you ready to learn the 'Way of the Fist'?
Cobra Kai students: YES, SENSEI!