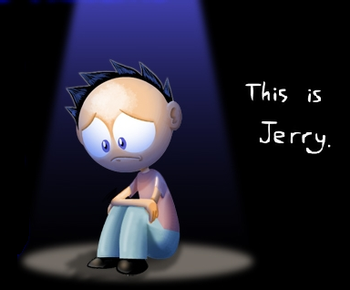 Jerry is a 2007-2009 series by HotDiggedyDemon told over the course of 5 Flash shorts thematically centered around helplessness, poverty, and the inability of the characters to handle the world around them.

The first cartoon was about Jerry's life as a young bachelor, the monotony of his day-to-day life and the birth of his child. Two of the other shorts dealt with his childhood, and the other two with the people whose lives were affected by Jerry. All in no particular order.

The episodes in order are:

Despite its crude animation and short running time, Jerry manages to weave a web of complicated, rounded characters and events.