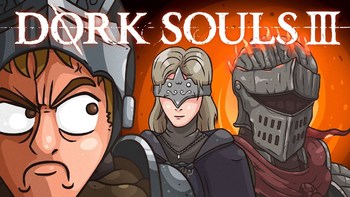 When the Fire fades, the majestic pudding of the lord is ready to be served.
Advertisement:

Dork Souls 3 is a series of parodies based on Dark Souls III created by animator Matthew Shezmen.

The series currently consists of the original Dork Souls 3 and its two sequels Seasoning Ash, focusing on the Ashes of Ariandel DLC, and Seasoned Knight, which focuses on the Ringed City DLC. The series follows Matthew in his attempt at playing through the game for the first time, and the many wacky misadventures and pop cultural references he comes across.

Matthew's channel can be found here

Dork Souls 3 can be found here

Seasoning Ash can be found here

Seasoned Knight can be found here