"I got into this business so I wouldn't have to work."

A pretty boy with who we're told is a decent actor. Vince has co-dependency issues and is a notorious womanizer. Never goes anywhere without one of his "boys".

"Johnny Depp did "Pirates of the Caribbean". And if I'm not mistaken, he wore a swashbuckling costume and carried a sword."

Vince's best friend since childhood, who takes on the role of his manager (unofficially, then officially). Eric is just about as co-dependent as Vince, but slightly more self-aware. Less of a womanizer, he's more of a serial monogamist.

"I've been working steady for the past 12 years, minus the last 3."

Vince's older (half)brother, who's been in the acting biz longer, but with not nearly as much success. Goes by "Drama" because well, he's a bit of a basket case.

"This is where you should be living, Vince. In a kingdom, like a prince."

Another of Vince's friends from childhood, but often hangs out with Drama. Came to Hollywood to act as Vince's driver, he enjoys being a hanger on with the least amount of guilt out of the three. At least for a while. 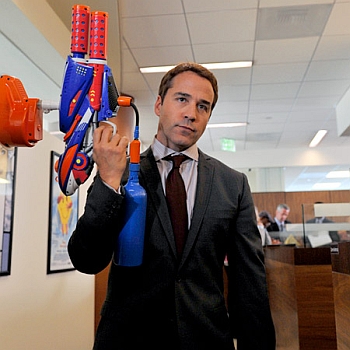 "Call me Helen Keller because I'm a fucking miracle worker!"

Vince's agent, a foul-mouthed, ruthless businessman, responsible for much of Vince's success. Although his demeanor can be off-putting, he's one of the most popular characters on the show, and has proven time and time again that he truly cares for Vince beyond just his career.

Ari's long-suffering wife and the mother of his children. She is one of the few people not intimidated by Ari's personality and is shown to be quite capable of standing up to him. She is also a trust fund baby and former soap opera actress.

E's on again, off again girlfriend. In the final season she becomes pregnant with E's baby, and the two of them fly off to an unknown location.