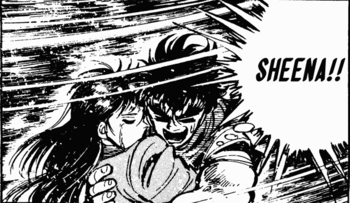 When an old friend of yours dies in your arms, you know everything will go downhill.
"To make a long story short, almost everyone dies. Matic kills Kain and Hiryu's almost-girlfriend Sheena, then Hiryu kills Matic and most of the Striders following him. At the game's end, Hiryu ignores any offers to rejoin the Strider organization and just wanders off, a lonely shell of a man. And you, the player, made him that way."
—Topless Robot on the NES Version of Strider Hiryu