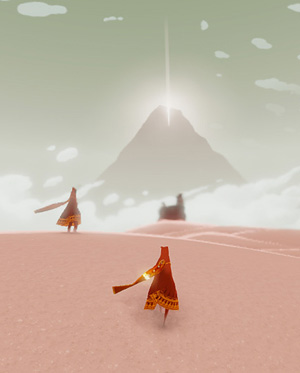 That identical figure to the left will probably be your new best friend by the end of the game.
Advertisement:

Journey is a video game for the PlayStation 3 created by thatgamecompany. You play as a nameless robed figure who is crossing the desert to reach a mountain in the distance. As the game progresses, you pass through several unique environments and ruins, uncovering more of the game's story as you go. It's something of an Adventure Game with light Platform Game elements.

Your character has only two real abilities. The first is singing, which radiates a sound wave proportional to how long you hold down the button — this is used to activate or attract various objects. The second is jumping, which allows you to go sailing through the air — this ability uses energy, which can be replenished by touching the floating bits of cloth you encounter throughout the game. The maximum amount of storable energy, indicated by the length of your character's trailing scarf, can be increased by collecting glowing symbols.

One of the game's main selling points is its unique form of multiplayer. During the game, you may encounter another player, whom you may travel with if you wish. However, unlike most multiplayer games, you can't see the other player's name or other information except for a unique icon that appears above their head when they sing, which is the only real way to communicate. There is no text or voice chat in the game, so you must rely entirely on your in-game abilities to work with your partner.

Decidedly not related to the rock band of the same name, an arcade game based on the band released in 1983, a video game Journey released in 1989 on various home computers or several films named Journey.

Compare and contrast LostWinds, which is practically its WiiWare and iOS equivalent, Star Sky for Wii U and also on iOS, ABZÛ, which was developed by some of the same people who created Journey, and Sky, the next game from thatgamecompany.

It is, as of March 2012, the fastest selling PSN-game of all time

Note that the game's story is very much meant to be experienced firsthand rather than read about, so check out the tropes below at your own risk.