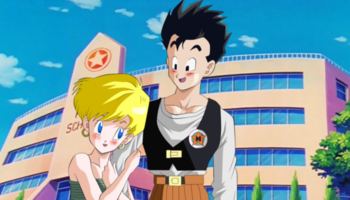 is an ongoing fanfiction of Dragon Ball, written by LastationLover5000. The story is set in a world where, during the week of preparation before the Cell Games, a young Erasa and Gohan have a chance meeting which destines them to be intertwined by fate to meet again in the future. From there, a blossoming romance is formed out of an endearing friendship. But given this is Dragon Ball, nothing is ever simple as soon Erasa is dragged into the antics and peril that she never knew existed in the world around her.
Advertisement:

As of now, the story has been going on for just over five years, and is divided into seven story arcs:

In addition to Fanfiction.net, the story can be found on Wattpad

and Archive of our Own

This Future is Black provides examples of: