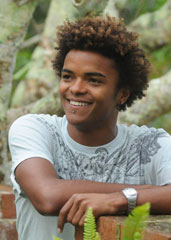 Eka Darville (born 11 April 1989 in Cairns, Australia) is an Australian actor, mostly known in his home country for playing Adam Bridge on teen surfing drama Blue Water High. Internationally, he is best known for playing Red Ranger Scott Truman on Power Rangers RPM, the seventeenth season of the long-running Power Rangers franchise which premiered in 2009, and his role as Malcolm Ducasse in Jessica Jones (2015).