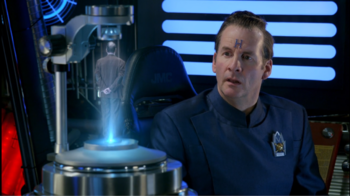 Rimmer's about to learn some hard truths about his parentage.
Advertisement:

We begin in Io Polytechnic, where Lecturer Rimmer is teaching peer pressure, in a class where his son, a younger Arnold Rimmer, is a student. He proceeds to use Rimmer as a guinea pig for said peer pressure class. One of the students tries to tell Rimmer this but he proceeds to insult her.

Fast forward to three million years into the future, and a rogue droid named Hoguey has come to the ship for a ‘duel to the death across space and time’ for killing his brother. However, he and his kin have been doing this song and dance so often that the crew is absolutely bored with it, suggesting alternative activities such as a ping-pong or mini-golf tournament, before agreeing on a Dwarfers vs rogue nutters cooking competition. However, trouble strikes when Hoguey reveals that he took a map of the galaxy from a Simulant deathship. And you know what they say about Simulants...

It's not long before the ship is under attack by said Simulants. Taking Hoguey's molecular destabliser, (and a mysterious device that belongs to Rimmer), they flee the ship on Blue Midget and hide in a nearby asteroid belt. As the Simulants search, the Dwarfers, having no other choice, allow Rimmer the duty of creating a battle plan. Rimmer, being Rimmer, has difficulties creating such a plan, however. This is until the Cat comes in, who tells him that he is still being haunted by his father and that he needs to face his demons. Inspired, Rimmer plays his holo-lamp, where he finds out something from his father.

Lecturer Rimmer is not his actual father. That identity actually belongs to Dungo, the gardener that the Rimmer family had.

Although the Dwarfers are concerned about the impact that this will have on Rimmer, he turns out to be happy with this development - his true father would have been proud with him for achieving the job of Second Technician after all. This inspires him to come up with a battle plan, which he is determined to see to the end despite the other's protests. This involves going out in front of the Simulant's ships, allowing them to fire, and using Hoguey's destabliser to allow the missiles to pass harmlessly through Blue Midget and into the ship. This plan is a success and the Dwarfers are saved, with the episode ending with Rimmer happily saying that "The slime's coming home" as they return to Red Dwarf.

At risk of being killed by Simulants, Rimmer plays a message left for him by his father, where he reveals something surprising about himself.

Example of:
I Am Not Your Father

At risk of being killed by Simulants, Rimmer plays a message left for him by his father, where he reveals something surprising about himself.