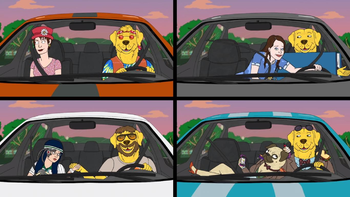 "This is going to be the best Halloween ever!"
"Why do all these idealistic, vivacious women eventually turn bitter and cruel after being with me? What’s the common denominator?"
— Mr. Peanutbutter

At the annual Halloween party at BoJack's place (that Mr. Peanutbutter has been throwing for 25 years with only BoJack's dubious consent), Pickles gets a crash course in Mr. Peanutbutter's romantic history — and some advice from Diane.