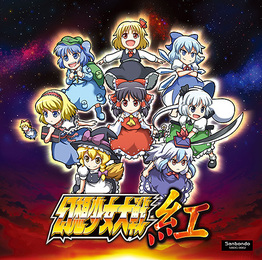 Gensou Shoujo Taisen ("Fantasy Maiden Wars") is a Touhou Project doujin game series in the spirit of the popular Super Robot Wars games, created by Sanbondo. The game is divided into four parts and loosely retells the story of every Touhou game from the 6th through the 12th, while attempting to create a more unified story between all of them.
Advertisement:

The first part, Kou (Scarlet) or E, retells the story of Embodiment of Scarlet Devil and has been translated into English by Deranged. The patch can be found here

Recently, the game got an Updated Re-release in the form of Fantasy Maiden Wars Complete Box, which condenses the four games into one package, and polishes various aspects of the game (such as giving characters more facial expressions, to give an example).

On March 9th, 2022, a port of the Complete Box called Genso Maiden Wars: Dream of the Stray Dreamer as announced for March 31st, 2022 release on the Nintendo Switch. (Japan only so far)