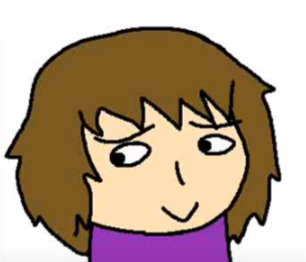 Oh boy! I'm gonna check out the description for PeaTea64's page and OH GOD IT'S GONE! I bet Dedede stole it!

, also known as PurpleTriforce64, PuffyTrousers, or PootyTooty, is a YouYuber, artist, and musician who is best known for her Kirby and Mega Man (Classic) videos. While her videos are cheaply made "MS Paint slideshows", she makes up for it with clever writing that manages to be incredibly quotable. Her videos were usually made with the help of her good friend Coolgrr980, who left the channel sometime around 2011.

She joined YouTube in 2009 and was at the peak of her popularity in 2010. However, in 2012, she announced that, being swamped with real-life responsibilities and personal projects, she would not be uploading any more of her signature animations. She is still active on Twitter

, however, where she still posts art and memes.

Tropes present in PeaTea's “Kirby in a Nutshell” videos

Dark Nebula: I am the ultimate power, Dark Nebula!
Kirby: Yeah, but you're the easiest boss in the game.
Dark Nebula: Oh. (explodes)
And Kirby went on a quest to save the world… for cake.
Waddle Dee: Oh crap, what is going on? Aah!
Waddle Dee: Do you ever get the feeling our race was destined to be insignificant?
Waddle Doo: No!
Spinni: I'm the speed!
Storo: I'm the power!
Doc: And I'm just plain lame…

Snake Man: And we’re gonna have such lovely kids!
Gemini Man: (screams)
Cut Man: Like, there isn’t much in [my room]. Like, there’s two blocks over there that can kill me, but yeah, that’s it!
Dr. Wily: This one note Fire Man is too hot!
Dr. Wily: This one note Ice Man is too cold!
Dr. Wily: Ah! This one note Cut Man is just right!
Snake Man: Aww, Gemini fella’s sleeping. What’s he dreaming about?
Gemini Man: ...Snake Man...
Snake Man: Oh, he’s dreaming about me!
Gemini Man: I’m… I’M GOING TO KILL YOU! BSSH BSSH BSSH BSSH BAH!
PT: Now don't get me wrong, I do not have anything against Hyadain. I love his music, quite honestly. His Rockman songs are very addicting and funny. But when I decided to play Megaman 2 again out of boredom, I realized something. Rock is competent. He defeated those Robot Masters quite easily. So when people draw pictures or write stories of Rockman getting... well, "taken advantage of" by the MM2 RMs, it doesn't really make sense to me.