This page is for listing the tropes related to the Citadel Council species in the Mass Effect universe, each with their own (often averted) tropes.

is an unofficial term used to refer to the area of the galaxy that recognizes the authority of the Citadel Council. It covers the vast majority of military, economic, demographic, scientific, and political power in the known galaxy. 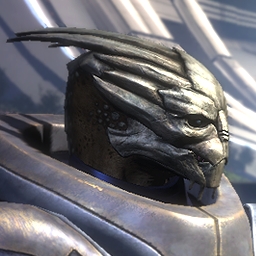 If you want a problem shot, ask a turian...
—Renegade Shepard

The third race to join the Citadel Council. The Turian Hierarchy is a very organized and militant society. Every physically and mentally-sound turian is either a soldier, a retired soldier or training to be a soldier. This has resulted in the Turian Hierarchy having the largest military force in the galaxy. Turians were the first alien species that humanity encountered. Unfortunately, this encounter took the form of the First Contact War. Although the other two Council Races managed to end the war diplomatically, human-turian relations are still rocky.

Turians are available for multiplayer, and can use the Sentinel and Soldier classes. The Retaliation DLC also adds Ghost Infiltrators, Havoc Soldiers, and Saboteur Engineers. The Reckoning DLC adds Cabal Vanguards. 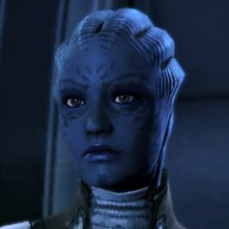 ....if you want a problem talked to death, ask an asari....
—Renegade Shepard

One of the two founding races of Citadel Space alongside the salarians and the most powerful and widespread race in the known galaxy, the asari often take the role of diplomats. They are a long lived (lifespans generally covering a millennium) mono-gendered race, but are seen as female by other species. Asari reproduce by linking their nervous system to another sentient being of any race and gender. The linking helps to randomize the asari's DNA while encouraging positive traits from the "father" species to manifest in the offspring (supposedly), which is always another asari. Partnerships of two asari are looked down upon by most of the species now as they believe it restricts genetic diversity (not to mention that asari born from such a relationship have a much higher chance of being Ardat-Yakshi, a very dangerous mutation). Their government is a loose federation of nation-states collectively known as the Asari Republics. All asari have biotic ability, but require training to use it effectively.

Asari are available for multiplayer in 3, and can use the Adept and Vanguard classes. The Resurgence pack adds the Justicar Adept class, and the Retaliation DLC adds Huntress Infiltrators and Valkyrie Sentinels. 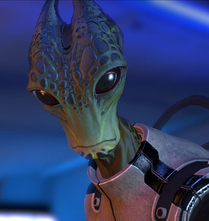 ...if you want a NEW problem, ask a salarian....
—Renegade Shepard

The second race to discover the Citadel and one of the two founding members of the Citadel Council. Their metabolism is much faster than those of other species; on the one hand, this means they're the second shortest-lived sentient beings in the galaxy after the vorcha. On the other, they waste a lot less of their lives sleeping. They also have "reproduction contracts" instead of marriages (which Mordin attributes to an inability to sustain courtship emotions). Similar to the asari, the salarian government is collection of clans, families, fiefdoms and duchies collectively referred to as the "Salarian Union" note Definitely NOT to be confused with the Salarian League. The Council based the Spectre program off the salarian Special Tasks Group, although the Spectres aren't as well-funded — you don't see STG operatives buying their own weapons.

Despite being outnumbered nine-to-one by the males, female salarian "dalatrasses" (clan/family leaders) wield the most political power on their home-world.

Salarians are available for multiplayer, and can use the Engineer and Infiltrator classes. 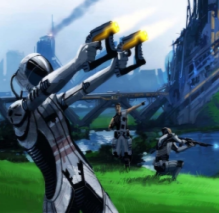 "... But if you want a problem fixed, ask a human."
— Renegade Shepard

The most recent species to enter the galactic scene. Humans are a bipedal race originated from Earth. They are the most culturally and genetically diverse of all of the species in the series. On Earth itself, humanity is still very much divided, with major powers including the United North American States, The People's Federation of China, and the European Union, but they all agree to project themselves as one faction to the galaxy through the Systems Alliance. They have advanced in galactic politics more quickly than other races, leading to a belief that humans are all impatient bullies. This advancement coupled with humanity's penchant for devising innovative ideas has led to humanity being considered to be something of a Wild Card; they are going to change the galaxy, but no one is certain how so.

Humans are one of the races available for multiplayer, and are the only one with access to all the classes and a customizable gender. The Rebellion Pack DLC adds the Ex-Cerberus Vanguard and Adept, and the Earth Pack adds N7 special forces characters for all of the classes, each with unique movesets and abilities. Additionally, the Reckoning Pack adds the Talon Mercenary Engineer.