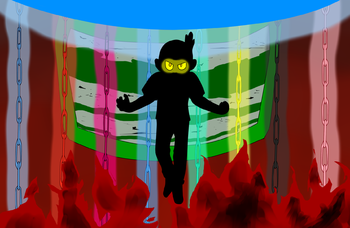 Cover art for the original version by Radiationaddiction21 on DeviantArt

"The world we see is not the first. After Lincoln discovers a mysterious dimension known as "The Original Reality", Lincoln, his sisters and several other allies must fight back against impostors of the sisters known as the "Proto-Sisters", and try to stop their enigmatic goals."
— The summary in the original fanfic
"Our world wasn't the first. It was never the first. What happened in the previous world, usually doesn't do anything to the new one. But this time... the creator's mistakes have grown strong enough to affect our world. And if we do nothing about them... then only the lord and savior, will be able to save us."
— The summary in the reboot
Advertisement:

Chains of Reality is a The Loud House fanfic written by Exotos135, which was published in February 19, 2017.

Also has some side-stories for it, all with the "Chains of Reality" prefix:

A reboot for the fanfic, titled ''Chains of Reality: Divinity Reborn", was posted on December 25th, 2017, and it can be read here

After several years, the story officially ended May 30th, 2021.

"Chains of Reality" provides examples of: