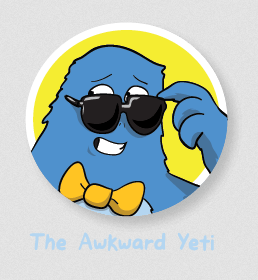 "I love this song. Play it until I hate music."
— Heart
Advertisement:

is a webcomic by Nick Seluck. It's about Lars, aka the awkward yeti, and his life, especially his interactions with his various organs. Heart and Brain have become so popular they've managed their own spinoff, which has a separate part of the site and its own book available. Heart always wants to run away and enjoy himself, doing things just for fun, while Brain is worried about their responsibilities and is trying to learn. Stomach has also had some cameos when the two of them are arguing about food. There are also various comics about other injuries and medical problems. Quite a few deal with the interaction between Tongue and Stomach.

Nick Seluck also did a 25-episode online series called "Medical Tales Retold" for Tapastice.com which has excerpts on the main site. The episode about depression/anxiety has been very popular as a way for people suffering from those mental illnesses as a way to describe what they're going through.