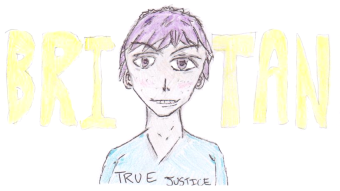 A picture of Britan Westwood, the main character, drawn by Evan Gamble himself.
Advertisement:

is a Web Serial Novel written by TheRealEvanSG

, the online name of Evan Gamble. It is a Fantasy set in a different world.

Britan Westwood is a normal boy living a normal life… or, at least, so he thinks. His world starts to flip when he overhears a conversation between his father and the town mayor about terrible creatures called Asager Shells and the Hunters that fight them. When his town is horribly attacked by one of these monsters, Britan launches into a quest to find the Asager Shell that did it and avenge his home. However, bandits from the southern border, deadly monster attacks, and hatred from the general population of Upper Cambria (as well as the rest of Seichi) plagues him along his journey. To combat these threats, he, like all other Hunters, is armed with a Blessing, a power unique to each Hunter. As he rises through the Hunter ranks and slowly assembles a Hunting Team to accompany and support him, only one certainty remains: as long as Seichi and the seven kingdoms within remain divided, peace will always hover just out of reach.

It can be found on Spacebattles

. For those interested in donating to the series, it also has a Patreon page

Tropes contained in The Seichi Chronicles: