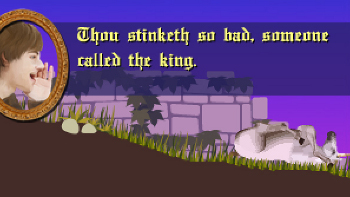 "Haw, ye silly ol' horse!"
Sherrod: "Ho there, CLOP! I hear tell there's a virgin on the far side of yon high and pleasant hill!"
Unicorn: "Confound thee Sherrod, this has best not be one of thine japes. Thou knowest I mislike hills."
- Dialogue displayed at the beginning of the game
Advertisement:

is a game that is extremely similar to QWOP. In this game, you play as a unicorn instead of an Olympic runner, with the same amount of difficulty and falling over as QWOP has. At the beginning of the game, a man named Sherrod (who is dressed in modern-day clothing) tells you in Ye Olde Butcherede Englishe that there is a virgin on the other side of a hill that needs to see you. In the slim chance that you do complete the game and make it to the end, it turns out that this was all a prank by the man, and you see an image of clop trampling him.

It's pretty much the same as QWOP, just with a little extra humor added in.