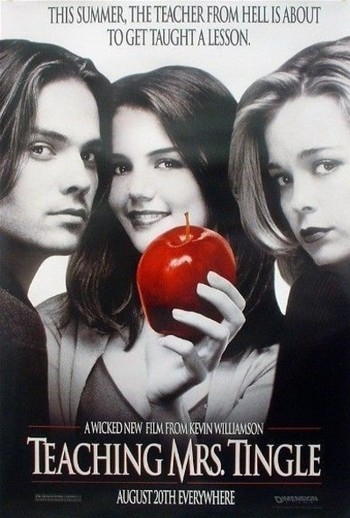 A 1999 Black Comedy film in which a poor girl's college stipend depends on her acing a history project in the class taught by the vile Mrs. Tingle (Helen Mirren).

Due to a friend's stupidity, the girl, Leigh Ann (Katie Holmes), is caught with a copy of the final exam, by Mrs. Tingle, who threatens to have her expelled. Leigh Ann, along with her two friends, go to Tingle's home to reason with her. But before long the situation gets out of control.

Due to recent events before the movie came out, its title was changed from the original "Killing Mrs. Tingle" to the above. (In Sweden, though, the word "Killing" remained in the title.) Written and directed by Kevin Williamson, and understandably his only turn in the director's chair to date.