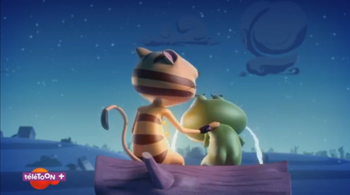 You know things have gotten bad when Kaeloo is crying and Mr. Cat is feeling sorry for her...

Sure, it's a kids' show about talking animals who live in a magical world, but it's still a Sadist Show where everyone is a woobie with a Dark and Troubled Past.

What if We Played at Riding Ponies?