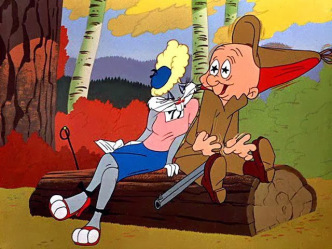 Yes, Elmer's hat is referencing what you think it is.
Happened in many Looney Tunes shorts with surprising frequency. Why? Because the animators and writers didn't have to worry (much) about standards and practices boards (besides The Hays Code), the cartoons were meant for an audience of adult theatergoers (although, in contrast to modern-day "adult" cartoons, they didn't latch on to gross-out comedy and raunchy sex to get laughs), and even if they did have to worry about indecent content, The Hays Code officers went after vaguely sexual or subversive content in both live-action and animated movies rather than the stuff that would today be considered obvious.