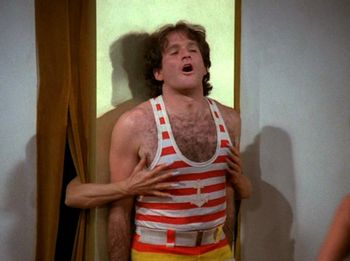 He's just getting tickled...honest!
"The Fruit Fucker made his prime-time television debut last Monday. Our friend Wil Wheaton was on Big Bang Theory sporting the FF shirt. I'd love to know what he told people when they asked him what was on his shirt. I'm guessing it wasn't "a fruit rapist"."
— Gabe, Penny Arcade

Prior to the late 1960s, there were very few (if any) network TV shows that got away with even the mildest of profanities. Even "hell" and "damn" would be bleeped if included in news reports, while scripts rarely (if ever) had those words. The only times "hell," "damn" and "ass" were allowed on TV were in religious contexts (such as, on a locally-produced TV program where a lay reader is quoting directly from the Bible, or a charismatic preacher referencing Hell in his sermon).

While Mork & Mindy (or rather, its star) may be the Trope Namer, Getting Crap Past the Radar has been going on ever since the beginning of television and is unlikely to stop as long as the censors are around, writers willing to mock them by letting the crap slip by them, and viewers who notice and put the instances on this website.