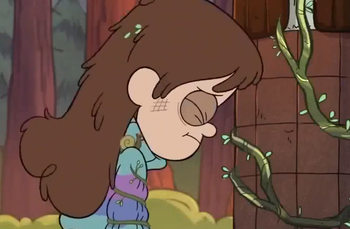 "And when you look at your left, you'll see Miserable Mabel, a girl who went bonkers after her dreams were shattered by some heartless jerk. Oh, hey, Dipper!"
"Mabel, how can everything be so amazing and so terrible all at the same time?"
— Dipper Pines, "Into the Bunker"
Advertisement:

While Dipper and Mabel's summer in Gravity Falls was often chock full of hilarious, heartwarming, and sometimes downright terrifying moments, it wasn't uncommon for the twins and others to have rough times that evoked sympathy. These heartbreaking bits get cranked up during Season 2 as more mysteries are solved, and suddenly some of the breezy Played for Laughs moments of previous adventures might not seem as funny anymore...

Scary-oke
Into the Bunker
The Golf War
Sock Opera
Soos and the Real Girl
Little Gift Shop of Horrors
Society of the Blind Eye
Blendin's Game
The Love God
Northwest Mansion Mystery
Not What He Seems
A Tale of Two Stans
Dungeons, Dungeons, and More Dungeons
The Stanchurian Candidate
The Last Mabelcorn
Roadside Attraction
Dipper and Mabel vs. the Future
Weirdmageddon Part 1
Weirdmageddon 2: Escape From Reality
Weirdmageddon 3: Take Back the Falls