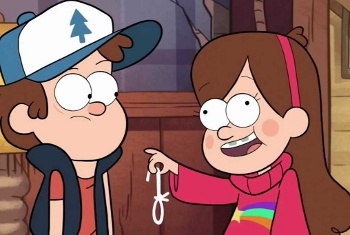 Literally every episode of Gravity Falls has a Crowning Moment of Funny to offer. The best can be found below.

Creature in the Closet (Promotional Short)
Dipper's Guide to the Unexplained

Fixin' It with Soos

Scary-oke
Into the Bunker
The Golf War
Sock Opera
Soos and the Real Girl
Little Gift Shop of Horrors
Society of the Blind Eye
Blendin's Game
The Love God
Northwest Mansion Mystery/Noir
Not What He Seems
A Tale of Two Stans
Dungeons, Dungeons, and More Dungeons
The Stanchurian Candidate
The Last Mabelcorn
Roadside Attraction
Dipper and Mabel vs. The Future
Weirdmageddon Part 1
Weirdmageddon 2: Escape from Reality
Weirdmageddon 3: Take Back The Falls