open/close all folders
Ashura and the Six Stars 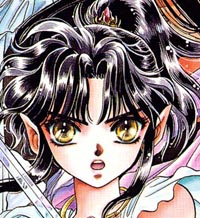 The only survivor of the Ashura Clan and its leader by birth. Sought by Taishakuten alongside Yasha, death and misery practically follow them. They have a loving and cheerful nature that hides the great amount of grief and self-blame they hold within them. Though Kuyoh foresaw Ashura was destined to kill Yasha, the bond between them is unbreakable and they live solely for each other.

Ashura is the last of a line of war and destruction gods. Their father, knowing his child would be born without the seal keeping their true nature in line, prepared an elaborate plan with Taishakuten so they could be prevented from destroying Tenkai. 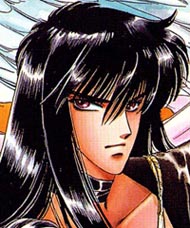 The leader and only survivor of the Yasha Clan. After hearing the last prophecy of Kuyoh instead of killing her, he looked for Ashura in the Enchanted Forest; this resulted in him being considered a traitor by Taishakuten and the annihilation of his Clan. He starts traveling with Ashura looking for the Six Starts to defeat Taishakuten. Though Kuyoh foresaw Ashura was destined to kill Yasha, the bond between them is unbreakable and they live solely for each other. 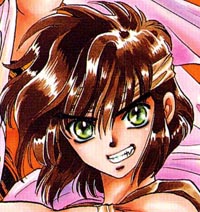 Succesor of the Ryuu Clan, at first he didn't want to be king. After finding out that Yasha was in his lands, he tried to challenge him to a fight but was quickly defeated. Looking for more power, he unsealed his clan's sword and became the new leader, though he soon escaped to join Ashura and Yasha in hopes of a new match with him. Of all the Six Stars, he's the only who doesn't have a personal reason to fight Taishakuten. 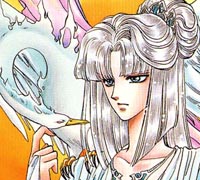 Leader of the Karura Clan. Childhood friends with Yasha and Kendappa. She despises Taishakuten but works under his rule in order to keep her ill littler sister Karyoubinga safe. After the death of Karyoubinga, she fakes her death to keep her clan safe and joins Yasha's cause to avenge her sister. 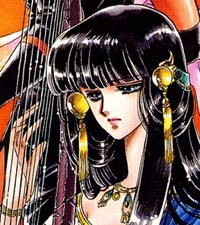 The Leader of the Kendappa Clan. A beautiful and highly talented harpist who sometimes performs for Taishakuten and is the target of prince Tenou's affections. Though very ladylike, she can defend herself quite well. She saved Souma from dying of her injuries and hid her with the help of Kisshouten. She's actually Taishakuten's Fourth General after her father's death. 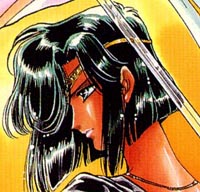 Only survivor of the Souma Clan. Her clan was annihilated on Taishakuten's order because of a legend that the blood of a member of Clan Souma can grant immortality to the person who drinks it. Her parents hid her from the army and died in front of her eyes. Injured, she ran away and was found by Kendappa, who hid her with the help of Kisshouten. 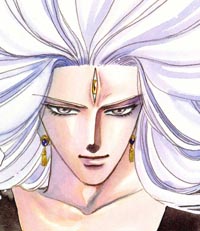 The new emperor of Tenkai, he controls his realm with an iron fist after usurping the throne by killing the former Tentei and Asura-oh, his most loyal servant. After Yasha awakened Ashura, he's willing to do anything and shed any blood necessary to keep his power.

Actually, the whole usurping Tenkai was Ashura-oh's plan to prevent the Six Stars from meeting and Ashura's awakening as God of Destruction, and Taishakuten killed and ate Ashura-oh at his request to empower him to kill Ashura if the plan failed. Also, Taishakuten was in love with Ashura-oh. 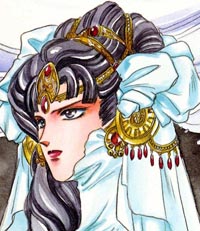 The Empress of Tenkai and wife of Taishakuten; her beautiful face is only a mask to cover what could be the most ruthless woman in the whole world. She was a human priestess of the Ashura Clan who, after receiving a god's longevity, started to plan her climb to power. She betrayed her clan by revealing their secrets to Taishakuten in return became the new Empress while she was still married to Ashura-oh. After giving birth to twins, she discovered that while one was Taishakuten's, the other was Ashura-oh's and tried to kill them herself to ensure Tenou's ascent to the throne while being the one pulling the strings behind him.

Ashura-oh married her not out of love, but because she was one of the keepers of Shurato's seal. He thought she would give birth to his unsealed child and that the child wouldn't be able to kill their own mother; sadly, he chose the wrong sister for the job. 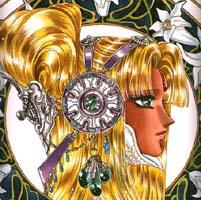 Shashi's sister and human priestess of the Ashura Clan. More humble and gentle than her sister, she's the guardian of Shurato and one of the seals of the sword, she was waiting for Ashura to get them back in an underground city's ruins. After her sister's betrayal, she committed suicide but was brought back for Ashura-oh to hide Shura-to and wait for the next successor. Died in the arms of her second love after giving the first seal to Ashura and ending her mission. 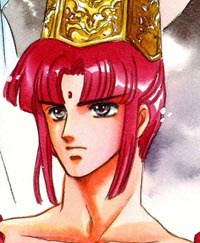 The Prince of Tenkai and Taishakuten and Shashi's son and heir, and unknown to him, fraternal twin and half-brother of Ashura. Despite his parents, he's benevolent, kind and rather humble; he's respected by his subjects and chased by all the young women in the court, but he already is in love with Kendappa-oh, his father's personal harpist. 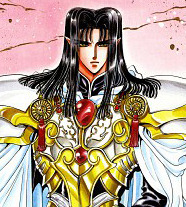 The former and deceased leader of the Ashura Clan and father of the present Ashura. He was the strongest warrior in Tenkai and Tentei's most loyal servant. Handsome, powerful, gentle and seemingly quite perfect, but hinted to possess a darker side.

And he does. The Ashura clan was previously a clan full of lovers of destruction and bloodlust, and were in fact a group of unstoppable war gods who were sealed to serve Tentei. Ashura-oh, knowing through Kuyoh's prophecy and his own visions that his child would born without this seal, planned an elaborate gambit alongside Taishakuten to prevent Ashura from waking as a god of destruction, even if it meant defying destiny and change stars's path just to keep his bloodline going. 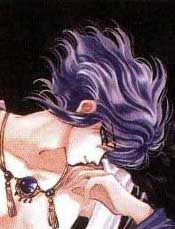 A mysterious man who calls himself a traveler, though he seems to know more about Yasha and Ashura than he should. Often pops out of nowhere to give Yasha's group warnings or advice.

He's the son of the former Tentei and his sister, the former royal stargazer Sonseiou. His father, who despised his birth, locked him and his mother away from civilization. Sonseiou ultimately went mad from the isolation and killed herself to avoid killing him. He managed to escape, growing wings in his back, and foresaw the Six Stars and Ashura's prophecy. He forged Yamato and give it to the Yasha Clan in hopes that this would be passed to Yasha-oh, Ashura's awakener. His real goal is to see if a very deep bond of love can change destiny. 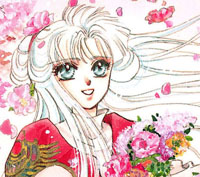 Karura-oh's little sister. Born with a weak body, she just can survive within the Sky City's thin air and considers herself an hindrance to her sister. Taishakuten abducts her for her beautiful singing voice and makes her perform in front of the people while coughing her lungs out because of the thick air. She dies singing her last song dedicated to her sister; her last wish was to Karura to be free. 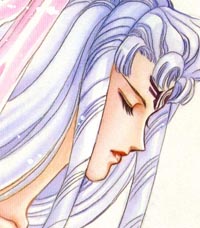 The royal stargazer. First introduced after escaping her prison when Yasha is given the order to kill her. Instead of killing her, Yasha hears her last prophecy and goes for Ashura, promising to return for her. He later finds Kuyoh dead, killed by Bishamonten by being impaled with her own staff. Yasha wasn't the first person to hear the prophecy; she first said it to Ashura-oh and interpreted it for him. Ashura-oh give her the order to tell the prophecy to Yasha. ..though incomplete 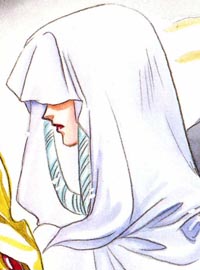 Kuyoh's sister. She wasn't born with powers since her sister was already a stargazer, but she blinded herself to gain some. Though not so powerful as Kuyoh, she can see the past and present with the water mirror and became Taishakuten's personal seer. 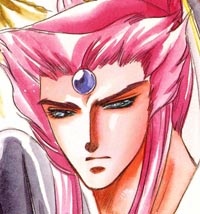 Taishakuten's right hand man, General of North and Kisshouten's husband. He's responsible for Yasha Clan's being destroyed. Follows Taishakuten's orders unhesitatingly. He joined Taishakuten's rebellion against Tentei as long as Taishakuten allowed him to marry Kisshouten, even knowing that she'd hate him. 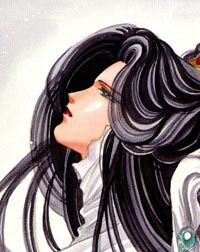 The former Tentei's daughter, married to Bishamonten as political hostage. She hide Souma after Kendappa-oh saved her, and offers her as companion and support to Yasha.

The deceased, former ruler of Tenkai and father of Kisshouten. Murdered by Taishakuten before the start of the series.

The leader and only survivor of the former beautiful city, Kusumabura. During the Holy War, his citizens were murdered and his city became ruined and isolated underground. He kidnapped Ashura believing that his blood was needed to awake Shurato. 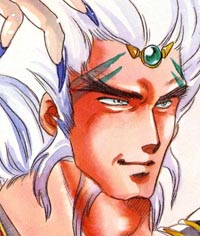 General of South and Karura-oh's superior. A rather nice guy despite working under Taishakuten.

Yasha's younger half brother. In his childhood, Yama suggested that he be named heir of the clan, even when everybody (Rasetsu included) knew Yama was the best candidate, but since Rasetsu was the legitimate son of the former leader and his wife he had a stronger claim. To avoid the responsibility he ran away and left the clan in Yama's hands. After hearing of the Yasha Clan's annihilation, he returns to the clan's land to find Yasha burning the remains of the people and demands an explanation. After making peace with Yasha, he died fighting Koumokuten's men to give Yasha's group time to get farther ahead of them.

A beautiful woman with a house in the woods whom the group encounters and spends the night with. She's waiting for her husband's return from a journey, and shows quite an interest in Yasha since he reminds her of her husband. Said husband is no other that Rasetsu, which makes her Yasha's sister-in-law. At the end, she kills herself to avoid giving information to Koumokuten about the whereabouts of Yasha's group, and is able to be Together in Death with Rasetsu. 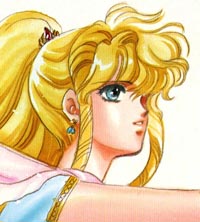 A dancer whom Ashura and Yasha get involved with after spending the night within her travelling group. Smitten with Yasha since she was six, and taking a liking to Ashura, she dies for not telling their whereabouts, leaving a heartbroken Ashura. 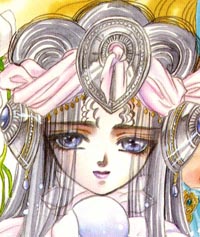 A mazoku who lived in a dimensional travelling ice castle in the north, close to the Yasha clan's lands. Has the form of a beautiful young girl (after she ate the original girl). Captured Yasha in hopes of eating him too since he was the strongest of the Yasha and therefore eating him would grant her immortality. Was killed by Kujaku.