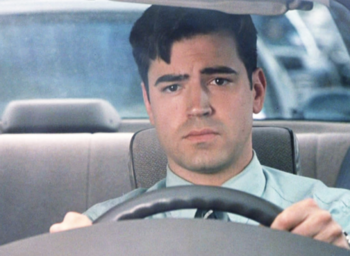 "I did absolutely nothing and it was everything I thought it could be."
Played by Ron Livingston

Peter Gibbons is a computer programmer at Initech whose main task is to convert units in file dates to the 2000 switch. He absolutely hates his job, but after an encounter with a hypnotherapist, Pete stops caring as much about his work and decides to just do what he wants.

Tropes that apply to Peter: 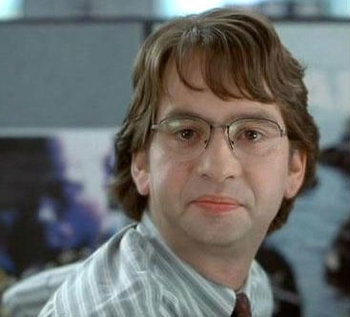 "PC LOAD LETTER? What the fuck does that mean?"
Played by David Herman

Michael Bolton works at Initech as a computer programmer. He appreciates his job despite his distaste for the company, and swears he has a virus at his disposal that could rip them off if he ever wanted to. 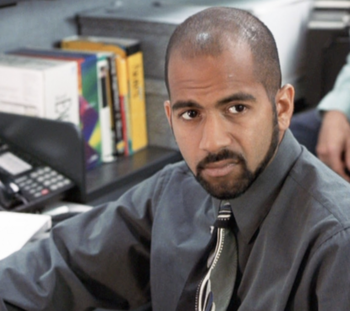 "Mother shitter, son of an ass! You, I just!"
Played by Ajay Naidu

Samir Nagan... Nagheney... Nagheenanajar is a programmer at Initech who moved to America for better opportunities and job security. 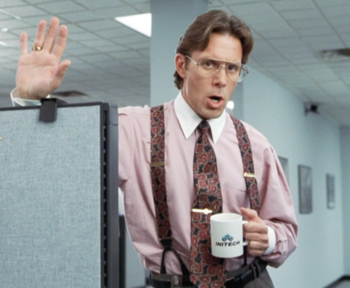 Bill Lumbergh is the smarmy Vice President of Initech, and Peter's Pointy-Haired Boss. He talks in a monotone, passive aggressive way with lots of "yeahs" and "okays" littered throughout his sentences, and doesn't care about the well-being of his employees despite constantly promoting office morale. 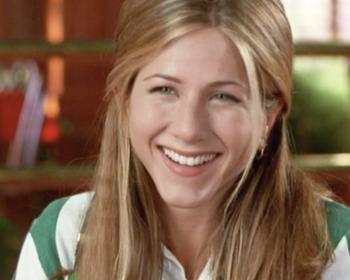 "You think you're some kind of, like, angel here? No, you're just this penny-stealing... wannabe criminal... man."
Played by Jennifer Aniston

Joanna is a cute waiter who works at Chotchkie's who Peter has a crush on. He asks her out after his hypnotherapy, and the two begin a relationship over the course of the movie. 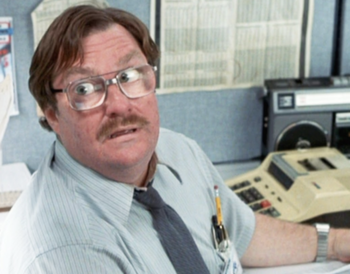 "I believe you have my stapler."
Played by Stephen Root

Milton Waddams is an oddball employee at Initech who mumbles all of his words and is constantly asked to move desks by his bosses. Milton also has a strange obsession with his red Swingline stapler. 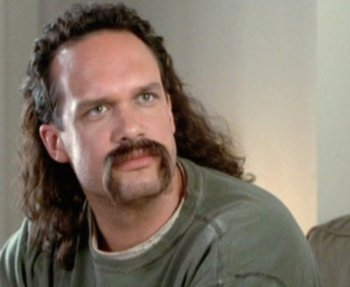 "Fuckin' A."
Played by Diedrich Bader

Lawrence is Peter's neighbor who talks to him through the walls of their apartment building. He works for a construction company and regularly tries scheduling fishing dates with his neighbor. 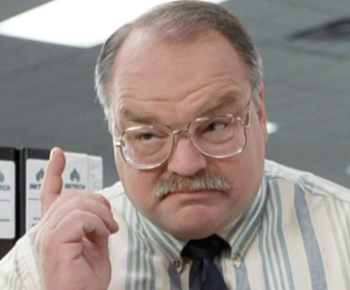 "I am good at dealing with people! Can't you understand that?!"
Played by Richard Riehle

Tom Smykowski is an employee at Initech with Peter, Michael, and Samir. He often latches on to their friend group to spout about his fears of getting laid off and lame eccentricities outside of the company. 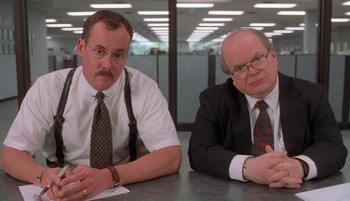 "What would you say you do here?"
Played By John C McGinley (Slydell) and Paul Willson (Porter)

A pair of consultants who are brought in to help downsize the company.

Tropes applying to the Bobs: