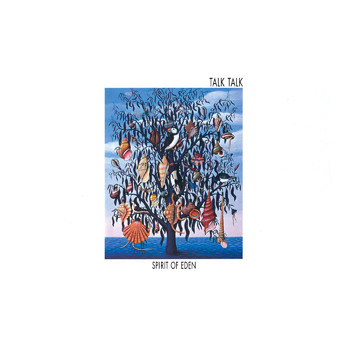 Spirit of Eden, released in 1988, is the fourth album by British group Talk Talk. A radical departure in sound and style from both the energetic Synth-Pop of their first two records and the pastoral art pop of their third, the album approaches a far more avant-garde style rooted in Mark Hollis' influences in experimental jazz, ethnomusicology, and impressionist Classical Music. The resulting sound would be a major influence on (if not the outright Trope Maker for) Post-Rock, which Talk Talk would further dive into on their follow-up.

Having already amassed a good amount of clout and money off of the smash success of The Colour of Spring, EMI essentially gave the band carte blanche for their follow-up, an opportunity that Hollis immediately seized to finally bring his eternal musical goals to fruition. Locking out their manager and EMI executives from recording sessions, Talk Talk gathered together a variety of session musicians and improvised in near-complete darkness, illuminated only by oil projectors and strobe lights and with little to no verbal communication, thus giving everyone the ability to play as their hearts desired. The resulting audio was then digitally stitched together into usable songs, with Hollis inserting and taking out elements as he saw fit over the course of the editing process.

The result led to a struggle between the band and EMI over the album's uncommercial sound, with EMI asking Talk Talk to re-record or insert new material, but Hollis resisted. The two eventually compromised by releasing an edited version of "I Believe in You" (backed with an edit of "Eden" and the non-album cut "John Cope") as the album's sole single, a move which Hollis wholely regretted. A Tim Pope-directed music video was hastily shot for the release, consisting solely of Hollis lip-syncing to the song in a dark room, replicating the environment the album was first put together in; the video ended up being Talk Talk's last. The band further made marketing the album difficult by refusing to tour for it, believing that its freeform style would translate poorly to live performances.

Despite this, EMI decided to extend the band's contract. Talk Talk, however, had come to the conclusion that EMI was the wrong label for them to be on, and immediately disputed this extension, resulting in a high-profile court case that revolved around whether or not the extension notification had been sent too late. The band's contract stipulated that an extension notice must be sent no later than three months after the completion of their last required album: EMI argued that "completion" was defined by whether they felt the album was satisfactory, but Talk Talk believed that the album was completed once recording sessions wrapped up. Courts initially ruled in EMI's favor, but the Court of Appeals later overturned the jurisdiction and provided a new verdict in Talk Talk's favor, thus freeing them from their contract. They would go on to sign with Polydor Records for their fifth and final album, Laughing Stock.

Trope my freedom up: