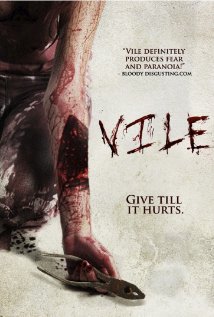 "Pain will be your only way out."

Vile is a 2011 American independent horror film in the vein of the Saw and Hostel series, directed by Taylor Sheridan.

Ten strangers wake up, locked in a house in the middle of nowhere, with strange tubes attached to the backs of their heads. A video begins to play and informs them that the tubes are there to collect endorphins from the brain that will be used to produce pharmaceuticals, and that if they can collect enough, they will be set free. The only problem is that the endorphins are only produced when the human body is in extreme pain…