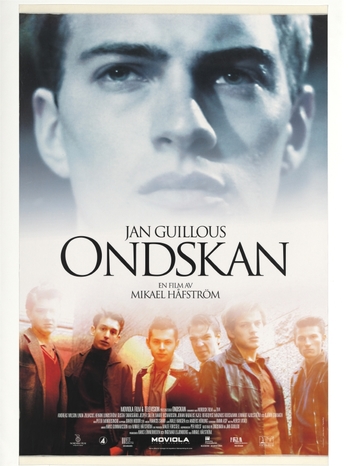 Evil (Ondskan) is a 2003 drama film from Sweden directed by Mikael Håfström. It is based on writer Jan Guillou's semi-autobiographical novel of the same name from 1981.

Erik is a young teenager in 1950s Sweden. His stepfather is a cruel and vicious man who beats him. Some time passes, and Erik grows into a troubled young man, regularly getting to fights at school as he takes the violence regularly inflicted on him out on others. He is expelled, with the headmaster at his school calling him "evil".

His mother remains desperate to get him graduated, so she sells some art that she has in the house and raises enough money to send him to prep school. Unfortunately the prep school, Stjärnsberg, is hardly an improvement. The school is dominated by the senior Sixth Form students, twelve of whom form a Students' Council. The boys of the Students' Council are sadistic martinets, who inflict painful corporal punishments for petty offenses like using a curse word at lunch. Erik refuses to submit to their petty humiliations, causing the sixth form students, led by the monstrous Otto Silverheilm (Gustaf Skarsgård) to repeatedly ratchet up their cruelty and brutality. Events gradually spiral out of control.