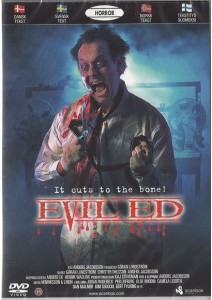 This is what editors usually feels like
'"Where the fuck is my beaver-rape scene?!"''
Advertisement:

The film tells the story of Ed the editor, a mild-mannered film editor with a wife, child, and a comfortable job editing art and drama films for a major studio. Following the suicide of their editor, heartless studio exec Sam Campbell transfers Ed to his department, the Splatter & Gore Department, to finish the censoring of the hyper-violent Loose Limbs series. Sam allows Ed the use of his secluded country cottage so Ed can go about his work undisturbed, or so he thinks. The seclusion and the constant exposure to the violent nature and content of the films he's editing start to drive Ed insane.

The film is a satire of the censoring of films in Sweden and is regarded as the top Swedish cult film and one of the goriest Swedish films of all time. It also uses an intentionally bad English dub for humorous effect. The film stars Johan Rudebeck as Evil Ed, Olof Rhodin as the sleazy Sam Campbell, Per Löfberg as the innocent horrorfan Nick and Gert Fylking as the crazy SWAT leader who challanges Evil Ed.

In 2017, Arrow released the film on Blu-ray with new scenes and a newly produced documentary Lost in Brainland about the film's troubled production.