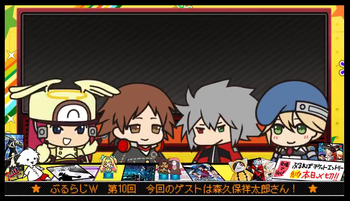 BlazBlue Radio, better known for its Japanese name Buluraji or Bururaji which stands for "Blue Radio", is a web-based radio show based on the BlazBlue series produced by Toshimichi Mori and primarily serves to promote the aforementioned series. It stars Asami Imai, Tomokazu Sugita, and Kanako Kondo, the voices of Tsubaki Yayoi/Izayoi, Ragna the Bloodedge, and Noel Vermillion respectively, as Super-Deformed versions of their characters (based on the "Teach Me, Miss Litchi!" segments of the games). Unique to Buluraji is the fact that it's also part visual media, allowing the series to display fanart submitted by listeners and use various styles of art to comedic effect.

The show has been produced in various seasons, each of which has a unique focus. There are also various specials hosted for certain events.

All the episodes can watched on the Nico Nico Douga channel of Arc System Works. The link for the playlist can be found here

. Most of them are also availabe on Arc System Works' Youtube channel, however, almost all of them are private. Buluraji NEO, though, remains public and it is also provided with English CC subtitles.