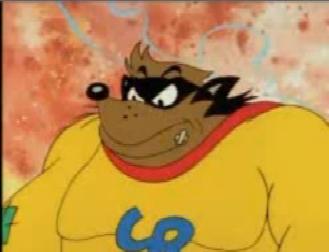 One of the most popular poopers in the world of YouTube Poop is KroboProductions. He is considered to be the third member of the “Holy Trinity” of YouTube Poop (the other two are Walrusguy and Deepercutt). He is most known for his poops involving Adventures of Sonic the Hedgehog (hence his icon).

Much like Walrusguy and Deepercutt, Krobo is a notable pooper who has used a wide array of different styles in his poops (such as sentence-mixing and flash), and with that in mind, it is no big surprise that he has a lot of fans.

His account was terminated in 2009, but fortunately, Krobo has made several

to reupload some of his old poops and keep making new ones. He is currently still active, but he doesn’t make poops as often as before. He later took to making poops that involve My Little Pony: Friendship Is Magic and The Fresh Prince of Bel-Air and still continues to use Adventures of Sonic the Hedgehog as well.

In October 2013, his main YouTube account, Dikekike, got terminated as well. Word of God says that it likely wasn't for copyright, and he's working on getting it back.

KroboProductions used the following tropes in his works: