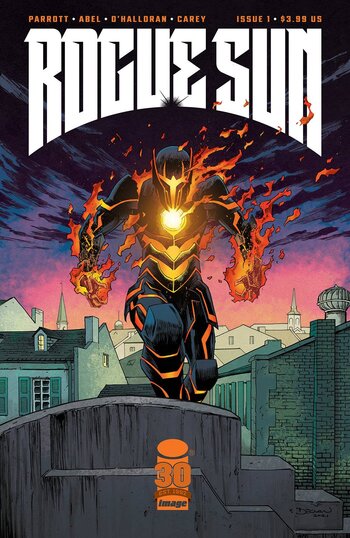 Rogue Sun is an ongoing superhero comic, written by Ryan Parrott, with art by ABEL. It is published by Image Comics and began in March 2022 note after being delayed from February 2022.

Marcus Randolph Bell is the superhero Rogue Sun, protector of the world and New Orleans' greatest superhero. He was also just killed. When Dylan Siegel and his mother, the family that Marcus abandoned, meet with Marcus' new family, the Bells, at the reading of Marcus' will, Dylan unexpectedly inherits his estranged father's powers and mantle. Now, Dylan is forced to confront his feelings on the man he grew up hating, solve the mystery of Marcus' murder, and become a superhero himself.

Rogue Sun is the second ongoing in the Massive-Verse, and the character Rogue Sun (Marcus' version) debuted in a one-shot formally launching the universe, Supermassive.