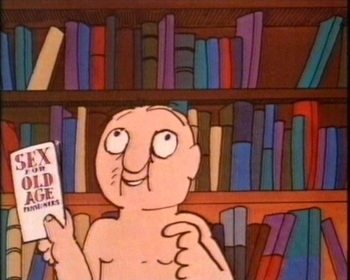 Stanley and Ethel are a married couple. The film opens with a shot of Stanley and Ethel sitting on their couch in the nude, Ethel knitting while Stanley (voiced by Bob Godfrey) addresses the camera directly. Most of the short consists of Stanley telling the viewer about how he and Ethel keep their sex life fresh. He starts out by describing their exotic sex positions ("The Swastika" looks just like you'd guess). Then he goes on to describe more ornate weird sex, like "Le Guillotine" which involves Ethel being dropped onto Stanley from a platform with a trap door, another game where she drops down to him on a parachute, another game where they ride around outside having sex on a bicycle...

And they're both naked the whole time. In other words, the Animation Age Ghetto is decisively averted.

None other than Stanley Kubrick personally selected this film to accompany A Clockwork Orange in theaters in the United Kingdom. Compare Dream Doll, another X-rated Bob Godfrey animated short.