Fan Fic / My Family and Other Equestrians 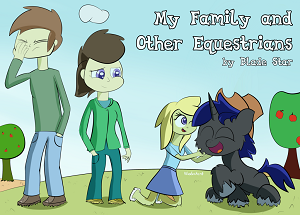 My Family and Other Equestrians is a My Little Pony: Friendship Is Magic Fan Fic created by Blade Star. It can be found on Fimfiction.Net here

At the surface, this appears to be a standard Human in Equestria story: a human gets teleported to Equestria and gets turned into a pony. However, there is a twist: he is not alone. His family mysteriously got teleported into Equestria as well, but the protagonist is the only one who has become a pony.

So how does one approach being in Equestria, when their family is along for the ride?