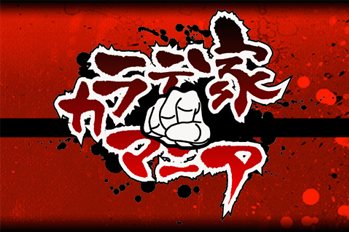 This beat is non-stop.
Karateka Mania is a Fan Game based on Rhythm Heaven's recurring "Karate Man" minigame, particularly the versions found in the Game Boy Advance and Nintendo DS installments.

Much like the minigames it's based on, you punch flying objects and kick barrels to the beat. Gameplay is virtually identical to the original (one button to punch, another to kick), though it's given a few tweaks to be more like a traditional rhythm game. Points are tallied up by combos, and instead of solely relying on audio cues, a chart at the bottom displays upcoming beats. It also comes with a Level Editor for players to make and upload their own charts.

Unfortunately for hopeful newcomers, the original creator's website went down, although downloads are still floating around on the internet.