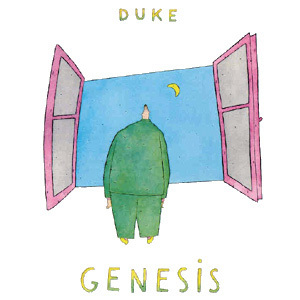 Again and again I ask myself, was I wrong?
Oh, but time's a healer and heaven knows I've been strong
But time went by
It wasn't so easy now, all uphill and not feeling so strong
Yes, times were hard
Too much thinking about the future and what the people might want

And then there was the time that she performed
When nobody called for more
And soon everytime she stepped into the light
They really let her know the score
—"Duchess"
Advertisement:

The newly-refreshed trio of Phil Collins, Tony Banks, and Mike Rutherford felt they were on the verge of a breakthrough with ...And Then There Were Three.... But not all was paradise. The new release put fresh pressure on Collins' marriage. His wife gave him a choice between their marriage and going on tour to promote the album.

He chose the album. She moved home to Vancouver, British Columbia, and filed for divorce. The band went on hiatus, with Collins following his wife to Canada to try to save their marriage, and Banks and Rutherford beginning work on solo albums.

When his efforts failed, Collins returned to the United Kingdom in the Spring of 1979, embittered by the experience. Collins then went to Sweden, joining Banks and Rutherford at Polar Studios in Stockholm, where both had recorded their solo albums. Back together, they got to work on the next Genesis album.

Six of its songs—"Behind the Lines", "Duchess", "Guide Vocal", "Turn It On Again", "Duke's Travels", and "Duke's End"—began as a 30-minute mini-Concept Album titled "Duke". That title eventually became the title for the whole album, while the story of the six combined songs became known as "The Story of Albert".

The second movement of the Story, "Duchess", marked the first time Phil used a drum machine.

The album was the first to hit No. 1 on the U.K. Albums chart, starting a trend that would remain unbroken until ...Calling All Stations... 17 years later (and even then that reached No. 2), and peaked at a band high of No. 11 on the Billboard 200 album chart; it went Platinum for the first time in the U.K., and also went Platinum in the U.S.

The band would begin to dip their toes in the burgeoning world of music videos, with narrative videos for both "Duchess" and "Misunderstanding".

I waited in the tropes for hours: