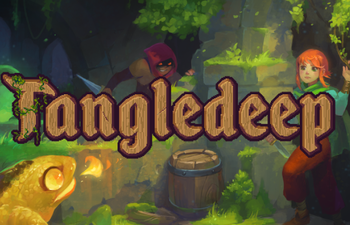 "Exploring is my calling. I've known it since I was a child. Tangledeep is always growing, always changing... But so am I. I'll never stop training. Magic is my ally, and it will flow with me. And I will leave no stone unturned looking for the truth! Everyone's counting on me, and I won't let them down! We'll grow together, and make new friends along the way. There's so much to discover... I don't know where it ends, but it starts here."
— Launch Trailer
Advertisement:

Tangledeep is a roguelike, featuring a 16-bit visual style and soundtrack, developed by Impact Gameworks. It combines classical, good ol' Nintendo Hard roguelike gameplay with game mechanics from Eastern RPGs, such as Final Fantasy and Disgaea.

For generations, people have been living in gigantic, underground forests, without seeing a glimpse of the world above them. Everyone here is born with an energy called the Touch, a power invigorating those who can feel it with a sense of adventure and exploration: Some are overflowing with Touch, and inherit the appearances of animals, while others may not feel the Touch at all. Mirai is of the latter. People inbued with Touch are naturally drawn to Tangledeep, an enormous labyrinth that leads to the surface. While Mirai never felt the Touch, she still feels a strange attraction to Tangledeep. To learn more about herself, she decides to step into the labyrinth, all the while shadowed by a mysterious, blue robed sorceress who seeks to claim Tangledeep's secrets for herself...

Tangledeep features, among other things, twelve character classes; a monster capture-and-raise system; Macrogame elements, such as an item bank and trees that can be harvested or chopped between runs; Item Dreams, short optional dungeons allowing you to power-up your gear; support for various inputs, including HID controllers, just a keyboard, just a mouse, and so on; and music by Andrew Aversa of OverClocked ReMix, with some tracks by Hiroki Kikuta and Grant Kirkhope.

Put on Kickstarter in May 2017

to aid development, the game was funded for double the developer's goal.

The game was released on PC for Windows, Mac, and Linux on February 2, 2018; the Nintendo Switch version was released on January 31, 2019. The game can be purchased on Steam

. An expansion, called Legend of Shara, has been released in April 4, 2019. It features a raised level cap, a new job (the Calligrapher), and more importantly, a new story mode featuring Shara.

Dawn of Dragons, the second expansion, was released in November 25th, 2019 and gives access to a quest leading to new levels named Dragon Dungeons, governed by the Ancient Dragons: Powerful Bonus Bosses giving access to brand-new "Dragon Shout" skills if they're defeated.

Tropes present in Tangledeep include: