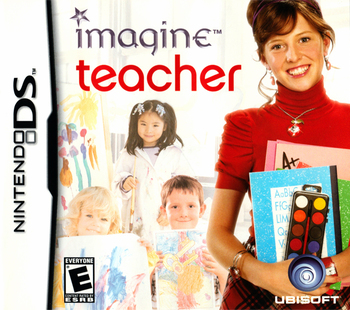 Imagine Teacher is from the Imagine series of games for the Nintendo DS.
Advertisement:

In the game, you play as April, a young teenage girl who takes up the job as a teacher in a small school outside a big city, and she happens to be the only teacher in the school. She gets assistance from the school's retiring principal, Mr. Coddleton, who shows that most students are out attending school in the city and their school isn't as popular. It's up to April to bring the school back to life while helping the students learn and grow. You start with a few students at first, but as you do your job well, more children will eventually enroll.

The aim of the game is to teach the students different subjects, such as math, reading and art, over the course of a five-day week. Each school day is divided into two classes separated by recess, and each lesson consists of the introduction, the activity, and finally the correction of the students' work. For each week though, you need to focus on a certain subject, which appears more often than the others. You may also need to find a lost item as you clean the classroom, or invite a student over for a night class. Also, you may have to obtain materials to celebrate an event in the game.

It has a sequel, Imagine Teacher Class Trip.