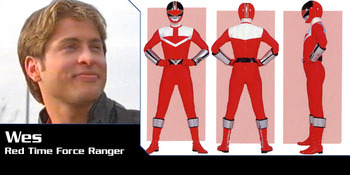 Wes was the son of Mr. Collins, being groomed by his father to become the heir of Bio Lab. When the four officers came from the year 3000 after Ransik, he was approached to use the Red Time Force Morpher by Jen as he was an ancestor of Alex, and was need to unlock the other Chrono Morphers. Despite Jen planning on him being used only to unlock the morphers, he convinced her to stay on with the Time Force Rangers, helping them get acclimated in the year 2001 and trying to find his own destiny against his father's wishes. 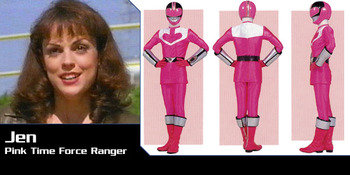 Jen was a Time Force officer and the fiancee to the original Red Ranger Alex. When Ransik seemingly killed Alex, she swore to take the former in, taking with her three other Time Force officers and the Chrono Morphers. Arriving at Silver Hills in the year 2001, she assumed the Pink Time Force powers and served as the main leader for the team. 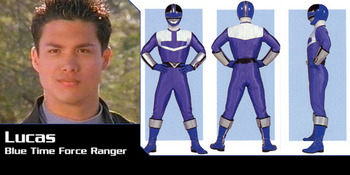 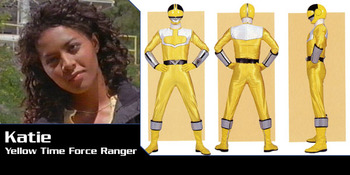 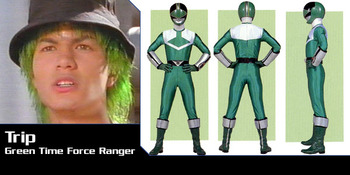 Trip was a Time Force officer and a Xybrian native with the ability to read minds and see people in different locations. Arriving at Silver Hills in the year 2001 with three other Time Force officers, he assumed the Green Time Force powers. 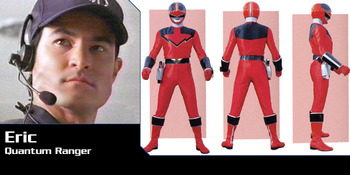 Years ago, Eric was a prep school student alongside Wes, but despite the latter's attempts to befriend him, he ignored Wes's attempts, leaving school to join Mr.Collins's Silver Guardian squad. After learning that Wes was the Red Ranger, he sought out the Quantum Ranger powers, and after acquiring it along with the Q-Rex Zord, he became the leader of the Silver Guardians. 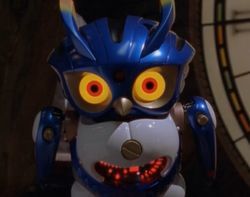 Voiced by: Rocío Prado (Latin American Spanish)
A robotic owl that joined the Rangers in the year 2001. He serves as their link to the year 3000. 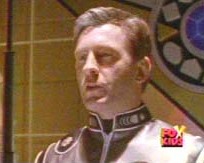 The mentor of the Time Force rangers. 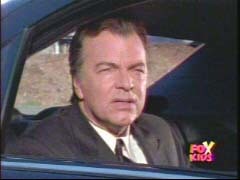 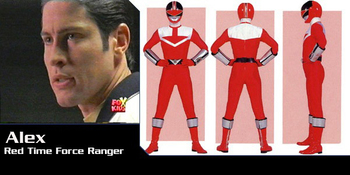 Voiced by: José Antonio Macías (Latin American Spanish)
The original Red Time Force Ranger and the future descendant to Wes. While believed to have died during Ransik's escape to 2001, he turned out alive, helping the Rangers out with the Time Shadow Zord and any other gear until he made his presence known. 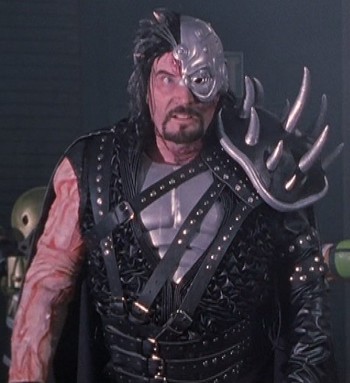 Voiced by: Gerardo Vásquez (Latin American Spanish)
Created from a chemical accident, Ransik suffered from society being afraid of his mutatious appearance, eventually growing more colder and ruthless until he founded a criminal empire of Mutants to rule over the humans. Eventually, he went to the year 2001 to have his Mutants rule over. 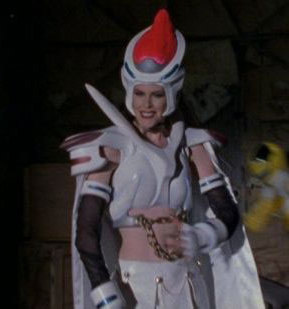 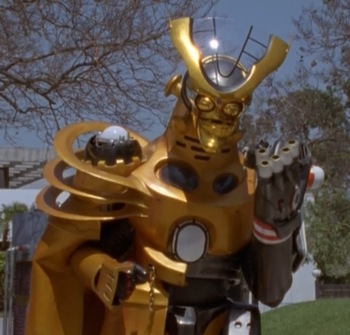 Voiced by: Alejandro Mayén (Latin American Spanish)
A robot under servitude to Ransik, who created the Cyclobots for the Mutants. However, he secretly wishes to usurp Ransik in many ways, often using the X-Vault Mutants and his own brand of robots to attack the Rangers. 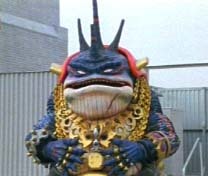 Voiced by: Alfonso Mellado (Latin American Spanish)
A blue whale-themed mutant criminal that was nearly frozen until Ransik and Nadira took over the Cryo Prison.

Robots that Ransik uses as his foot soldiers.
The Mutant Criminals and Other Enemies

Voiced by: Derek Stephen Prince
A ladybug-themed mutant and the first criminal Ransik released in the year 2001.

Voiced by: David Stenstrom
A frog-themed mutant that helped Ransik take over a television station to reveal himself.

Voiced by: Ezra Weisz
An octopus mutant with a lobster body that kidnapped an entire bus full of children and held them for ransom for 10 million dollars.

Voiced by: ??
A medusa-themed mutant.

Voiced by: Tom Wyner
A catfish-themed mutant bounty hunter and a mutant Jen and Alex arrested back in the year 3000.

Voiced by: Richard Epcar
A powerful mutant that was locked away in the X-Vault.

Voiced by: Steve Kramer
A centipede-themed mutant who can control and absorb electricity.

Voiced by: Bob Papenbrook
An electric-themed mutant that was locked away in the X-Vault.

Voiced by: Tony Oliver
A hammerhead shark-themed mutant with a lobster claw for a right hand who helped Nadira kidnap Doctor Michael Zaskin to figure out the Quantum Morpher's secrets.

A turtle-themed mutant scientist who has the ability to teleport things into other dimensions.

Voiced by: Barbara Goodson
A jellyfish/squid-themed mutant that was arrested for petty theft.

Voiced by: Sean Cw Johnson/Dan Southworth (voice manipulation)
Portrayed by: Don Dowe
An odd squid-themed mutant who can copy the voices of other people.

Voiced by: Valerie Vernon
Portrayed by: Rachelle Pettinato
A gorgon-themed female mutant, who can hypnotize any man with her bracelet.

Voiced by/Played by: Riley Schmidt
A racecar driver-themed mutant that was arrested for reckless driving, and an old rival to Lucas. Nadira unfroze him in 2001 to be her chauffeur for quick getaways.

Voiced by: Bob Papenbrook
A powerful mechanical-themed mutant, who has a big arsenal of weapons.

Voiced by: Terrence Stone
Portrayed by: Harvey Shain
A crazy movie director-themed mutant who trapped the Rangers in his own script: "The End of the Rangers.".

Voiced by: J.W. Myers
A steel-themed mutant who was Jen's first partner in Time Force, but later betrayed her and joined Ransik.

Voiced by: Kim Strauss
A venom-themed mutant from the X-Vault, and a mutant with a history with Ransik.

Voiced by: Paul Schrier
A strong mechanical axe-themed mutant who helped Ransik find Frax and get the serum from Bio Labs.

Voiced by: Mike Reynolds.
Portrayed by: C. J. Byrnes
A powerful wizard-themed mutant with telekinetic powers. He disguised himself as the salesman in the gymnastic room and sold a special cocktail that transformed the people into the mindless slaves of Frax

Voiced by: Dave Mallow
A black knight who wanted to claim the Battle Fire.

Voiced by: Ron Roggé
A Super Demon that was trapped in the Solar Amulet.

Voiced by: Philip Proctor
A big-brained mutant that can go inside mirrors.

Voiced by: Kirk Thornton
An angel-themed mutant that attacked the Rangers in Miracon's mirror world.

Voiced by: Mark Richardson
A giant girdled lizard-themed mutant, and the final mutant Ransik had in his Cryo Prison.
Frax's Robots

One of Frax's robots. Unique in that he's the only Monster of the Week to be robotic.

The last of Frax's robots that was used in Ransik's final attack on Silver Hill.