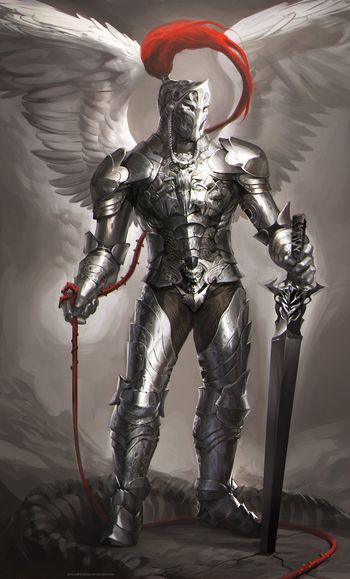 is what a ronian, sort of, looks like.
"So sorry to see such beauty be sacrificed."
— Kapral

Swordstorm is a My Little Pony: Friendship Is Magic fanfiction written by HeavyMetalKnight

and the side story Sellsword

The worlds of Equestria and Ronia have been created since the beginning, crafted by omnipotent makers. Thousands of years ago, an alliance was forged by the two princesses, to bring peace to both of their worlds. And they intended to keep that peace for a lifetime.However... newer threats have emerged since then; plotting to break the alliance by whatever means necessary. Such as a cult of heretics who use blasphemous practices to wreak havoc on pony-kind.

Twilight Sparkle and her friends become aware of this issue and plan to put a stop to it. But sometimes, fate doesn't play kindly to heroes. Meanwhile, an unfortunate pony is imprisoned in a world she knows nothing about. A tale riddled with twists and turns around every corner, an inevitable sense of danger, and fear of a possible war. Will there be saviors to prevent an all-out war? Or will each world be hellbent on destroying the other? We shall see.

The Swordstorm series provides examples of: